Research at MSU involving biological toxins on the Select Agent list or have an LD50 in vertebrates of ≤100 ng/kg must be approved by the IBC prior to initiation of work. To determine if the toxin in requires IBC approval, please consult the Toxin Table in Appendix 1 or contact the MSU Biosafety Officer Ryan Bartlett, ryan.bartlett@montana.edu, (406) 994-6733. Investigators working with a biological toxin that require IBC approval must complete the IBC protocol form.

Work involving recombinant or synthetic DNAs that encode the active subunit(s) of a biological toxin with an LD50 of ≤100 mg/kg in vertebrates, cells, organisms, or viruses must also have IBC approval before initiation of the biological toxin work. In some cases, additional review by the National Institutes of Health Office of Biotechnology Activities (NIH-OBA) as indicated in Section lll- B-1 of the NIH guidlines may be required.

Investigators that possess a Select Agent Toxin less than or equal to the permissible amount must maintain an inventory of the amount of the Select Agent Toxin present in the laboratory. This inventory should document the number of vials, amount in each, amount remaining (if applicable) after each use, and how the toxin was inactivated when no longer needed for experiments. To meet this requirement, investigators should use the MSU Toxin Inventory Form.

Certain biological toxins, including genetic elements encoding these toxins, are restricted for export by the U.S. Department of Commerce and are subject to Export Control regulations.

To see if the toxin requires IBC approval, please consult the table in Appendix 1 or contact the MSU Biosafety Officer Ryan Bartlett, ryan.bartlett@montana.edu, (406) 994-6733.

Examples of violations include:

When the investigation deems that noncompliance has occurred with university policies or federal regulations, or that there is a past, present, or future threat to biosafety, the investigator(s) will provide a report to the IBC and the Vice President for Research and Economic Development. The report shall include:

Examples of Corrective Actions After Determination of Noncompliance

Most moderate noncompliance violations that are not a result of willful or malicious intent of safety
practices, federal regulations, or that do not pose a safety threat to individuals, the university, or the
environment can be resolved administratively. For serious noncompliance violations the IBC may mandate remedial corrective actions. Such corrective actions may include, but are not limited to:

If at any time during the investigation it is determine that either university policies or federal regulations have been violated, which pose a threat to individuals, the university, or the environment, the Biosafety Officer in consultation with the IBC have the authority to suspend the activity, and to take control of any biohazardous materials present in the facility or laboratory. The decision to suspend an activity will require IBC deliberation and vote. Such deliberation by the IBC may involve the review the available evidence, possible consequences, and interview the individual(s) under investigation. The IBC may
determine to not permit the research to continue until the appropriate corrective actions have been instituted. Corrective actions required before research activities may resume include, but are not limited to the following:

In extreme cases, the IBC may determine that a serious noncompliant violation poses such a risk that the activity is indefinitely suspended, vote to revoke an approved IBC protocol, or subsequently refer the matter to the Vice President for Research and Economic Development for consultation and resolution.

This document describes the policy and procedures for imaging of biological agents with microscopes at MSU.  Adherence to this policy will ensure that employees, students and members of the public are not exposed to biological agents.

Ensuring that microscopes are appropriately used, cleaned and decontaminated is the responsibility oftheindividual operating the microscope.

The MSU Biosafety Officer has established minimum requirements for proper decontamination of laboratory equipment that may have been exposed to biological materials, (see MSU Biosafety Manual.)

IBC Policy for Service/Assistance Animals in Teaching and Research Laboratories

The main role of the MSU Institutional Biosafety Committee (IBC) is to protect students, teachers, researchers, and community from potential exposure to the biological agents studied in MSU research and teaching laboratories. This mission depends on the execution of safe bioagent handling and containment, as prescribed by federal regulations and MSU biosafety policies and procedures. In addition, access to laboratories must sometimes be restricted in cases where particularly dangerous, opportunistic, or pathogenic bioagents are present. These cases require special consideration by the IBC, to ensure that MSU does everything in its power to accommodate the unique needs of individuals who rely on service/assistance animals.

In this policy, “individual” refers to students, researchers, and all other persons who may enter a research or teaching laboratory for the purposes of learning and performing experiments.

This policy does not apply to the Animal Resources Center (ARC).

A “service animal” is a dog, miniature horse, or other species that has been individually trained to do work or perform tasks for the benefit of an individual with a disability. On the MSU campus, there are also emotional support and other “assistance animals,” which are often registered with the MSU Office of Disability Services so that they are authorized to accompany individuals to MSU classes. For individuals who wish to bring their service/assistance animals into laboratories, Disability Services will serve as a liaison between the individual and the lab manager or other appropriate MSU employee, to engage in the process of determining whether and under what conditions an animal may be allowed in a specific laboratory. If an individual has not obtained prior approval from Disability Services, the animal may still be permitted, if it is deemed reasonable under the circumstances.

MSU employees are encouraged to reach out to Disability Services and the Biosafety Officer for assistance in determining whether an animal which has not received prior approval may be allowed in a lab.

Laboratories are categorized according to the relative risks associated with the bioagents under study. BSL1 containment laboratories are designed for the investigation of bioagents that pose a minimal potential threat to people or environment and are generally not associated with human disease. In the case of a BSL1 research or teaching laboratory, a service/assistance animal may accompany an individual on condition that lab safety and activities are not compromised or interfered with in any way. Consultation with Disability Services, the MSU employee in charge, and the Biosafety Officer will ensure that appropriate accommodations are made in advance.

BSL2 containment laboratories are designed for work on bioagents of moderate disease threat to healthy humans. MSU does not allow animals in BSL2 containment facilities because of federal regulations; the key biosafety regulatory guide, the CDC’s Biosafety in Microbiological and Biomedical Laboratories (Centers for Disease Control, BMBL), states that “Animals and plants not associated with the work being performed must not be permitted in the laboratory.” However, alternative solutions may be worked out in advance with the approval of the appropriate MSU employee in charge of the laboratory (laboratory manager, professor or principal investigator), so that individuals with service/assistance animals can be accommodated in some workable fashion.

The MSU Office of Disability Services, the IBC, MSU laboratory managers, and the Biosafety Officer will work together to accommodate individuals with service/assistance animals in our teaching and research programs as best we can. For questions, please contact the MSU Office of Disability Services and MSU Biosafety Officer, Ryan Bartlett, ryan.bartlett@montana.edu, (406) 994-6733.

If spill is inside a BSC – Keep BSC running for at least 15 minutes after the cleanup. Clean spill tray below work area and trough below air intake grill while BSC is running.

If spill is inside BSC - Keep BSC running for at least 15 minutes after the cleanup. Clean spill tray below work area and trough below air intake grill while BSC is running.

Every biosafety laboratory that works with biological agents must have a biohazard spill kit on hand, that is readily accessible and easy to find in the laboratory. It should have appropriate equipment and supplies on hand for managing spills and accidents involving biohazardous materials.

Biosafety engineering equipment in the lab should include an eyewash station, a hand-washing sink with soap and paper towels, and a shower.

All non-disposable items should be autoclavable or compatible with the disinfectant to be used. Most of the listed items, as well as other biohazard spill control items, are available at Central Stores, and often are contained within various commercially-available biohazardous spill control kits.

This document describes the policy and procedures for transporting biological agents between MSU laboratories and buildings. Accidents can result in the release of these agents and potentially cause serious harm to people, community, and environment. It is the intention of this policy to provide a set of procedures to minimize risks of exposure during transport.

Like other university personnel, researchers must adhere to all Montana state policies regarding transportation (see SRM Automobile Insurance webpage for details).

Transporting RG1/BSL1 Biological Agents between Labs in the Same Building

1. RG1/BSL1 biological agents may be transported without the use of a cart, provided that the agents are in a labeled (with names of biological agent, researcher, date), closed, leak-proof, shatter-proof container, preferably with a screw-cap lid (e.g. conical tubes, specimen cups). In the absence of a screw-cap, use parafilm to tightly seal the top of the container to minimize the potential for spillage.

2. Take special care when moving through public spaces. Personal Protective Equipment (PPE) is not permitted in public spaces except for a clean/unsoiled lab coat.

Transporting RG2/BSL2 Biological Agents between Labs in the Same Building

1. RG2/BSL2 biological agents must be placed in a labeled (names of biological agent, researcher, date), closed, leak- proof, shatter-proof primary container, preferably with a screw-cap lid (e.g. conical tubes, specimen cups). In the absence of a screw-cap, use parafilm to seal the container top.

2. Primary container(s) must be placed in a secondary tray (e.g. autoclave bin), and then transported on a lab cart.

4. Take special care when moving through public spaces; PPE is not permitted except for a clean/unsoiled lab coat.

1. Biological agents must be placed in a labeled (names of biological agent, researcher, date), closed, leak-proof, shatter-proof primary container, preferably with a screw-cap lid (e.g. conical tubes, specimen cups). In the absence of a screw-cap, use parafilm to tightly seal the top of the container to minimize the potential for spillage.

2. The primary container(s) must be placed in a labeled, leak-proof, shatter-proof secondary container that is sturdy enough to remain closed if dropped (see Fig. 2).

4. Take special care when moving through public spaces, and do not wear PPE, including gloves. Careful handling of sharps will prevent injury and reduce the risk of infection. An accident or injury involving a sharp contaminated with human blood or other infectious material may result in an individual being infected with human immunodeficiency virus (HIV), hepatitis B virus (HBV), hepatitis C virus (HCV), or other pathogens.

*Recapping is permissible if it can be demonstrated to the Biosafety officer and SRM that no alternative is feasible or that such an action is required by a specific procedure. 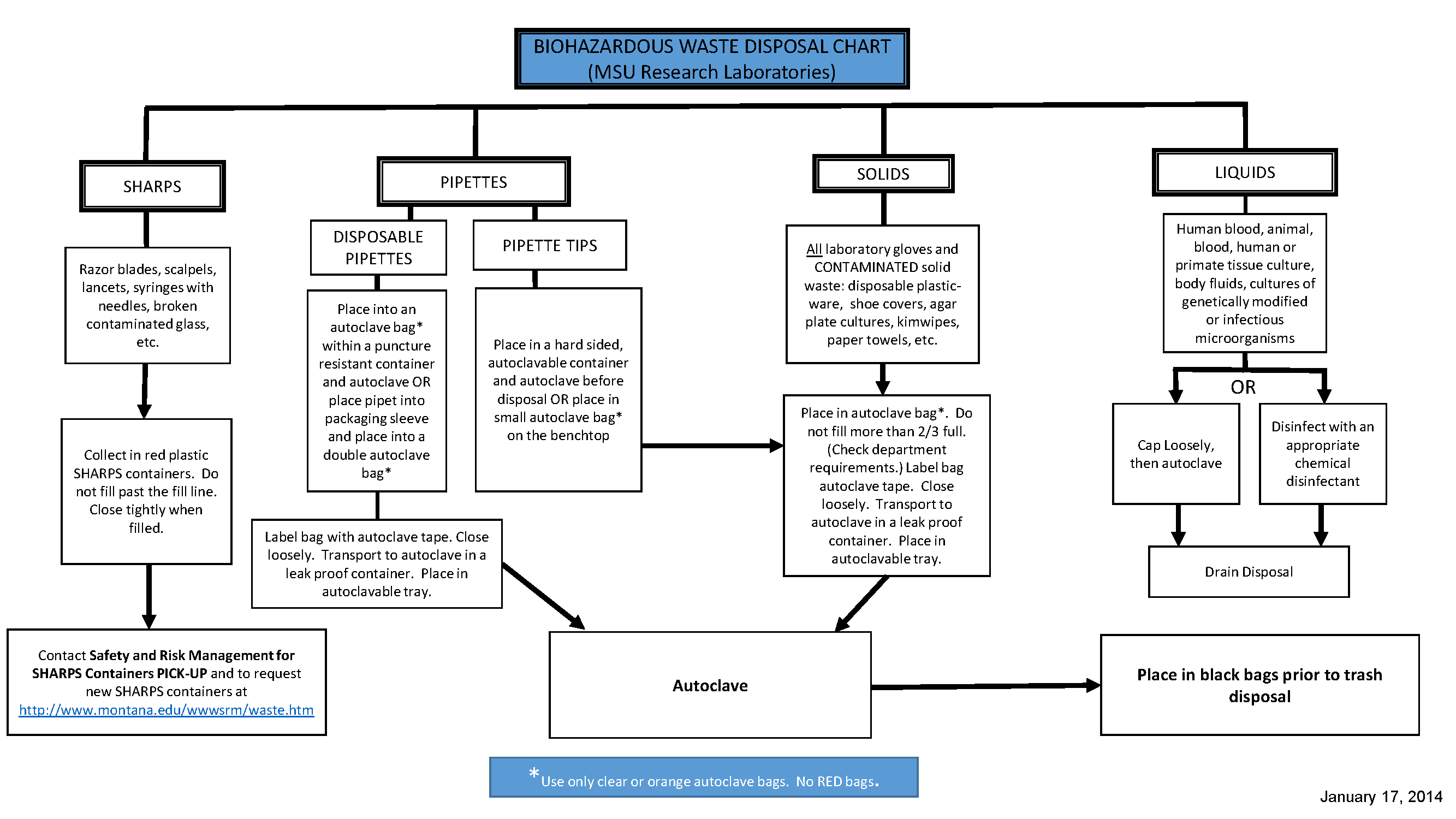