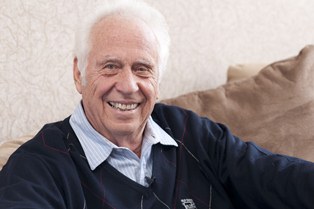 Jake Jabs, president and CEO of American Furniture Warehouse announced December 2010 that he would give more than $3 million to MSU's Jake Jabs College of Business & Entrepreneurship (JJCBE). The gift will be earmarked for the Center for Entrepreneurship, sustaining it for years to come.

"This gift, from a man who grew up in a small town in Montana, will have an impact on generations of students from Montana and elsewhere," said Dan Moshavi, dean of the College. "It will pave the way for thousands of MSU students to hone their entrepreneurial skills."

Jabs' father, who had no formal education beyond the second grade but who believed strongly in its value, is part of what inspired Jabs to invest in education, Jabs said.

The fourth of nine children, Jabs was raised in rural Montana on a ranch outside Lodge Grass. Jabs' family lived in a home that had no indoor plumbing, electricity or running water. They were poor, but the children didn't know it at the time, Jabs wrote in an autobiography published in 2000.

Instead, his parents taught their children the importance of self-confidence, the courage to take risks, the importance of developing hobbies outside of work and caring about things other than money. The family formed a band together, often playing for community dances and other special gatherings. Music has been one of Jabs' lifelong pursuits.

Jabs also credits his parents, who immigrated from Russia and Poland, for providing him with a strong work ethic, and Jabs' father shared with his children his belief that education was essential.

"My dad always wanted us to get an education," Jabs said during a recent visit to MSU. "He always said he felt left out. My dad only had the opportunity to go through the second grade in Poland, and my mother only went through the seventh grade. Both of them encouraged us to get an education, saying it opens doors for you. It gives you opportunities that you wouldn't have otherwise. So, my dad gave us enough money to start in college.

"Education gives you the confidence to take risks, and to be successful in life you have to have take risks," Jabs added.

After he graduated from high school in Hardin, Jabs enrolled at was then Montana State College, graduating with a degree in vocational agriculture in 1952.

During his college years, he played with the Montana State band, was on the MSU rodeo team, joined the ROTC, and took many elective courses, which he said helped him explore a variety of subjects and ultimately helped him pursue several different careers throughout his life, including music and business.

And, though his studies were focused on agriculture, his business instincts and entrepreneurial spirit were evident even as a college student and young adult. Jabs and his brother worked their way through college doing odd jobs and playing music. Later, after serving in the U.S. Air Force and working as a musician in Nashville, Jabs returned to Bozeman, where he bought a music store. He secured a loan from the bank to buy out his partner in the store only after putting up as collateral cattle from his family's ranch.

Jabs' first serious venture into the furniture business came in 1968, when he opened a high-end furniture store with locations in Denver, Colorado Springs, Pueblo, Colo. and Billings. Five years later, Jabs decided to close the business. Then, in 1975, he purchased a struggling furniture business, renaming it American Furniture Warehouse.

Since then, American Furniture Warehouse has experienced remarkable growth and expanded into an 11-store operation. Jabs, who is now 80, remains responsible for the day-to-day operations of the company and also oversees the company's team of buyers, often traveling to Asia on purchasing trips. Today, American Furniture Warehouse is one of the top retail furniture companies in the U.S. and one of the largest privately held businesses in Colorado, with sales topping $330 million in 2008 and 1,400 employees throughout Colorado.

Jabs, well-known in Colorado for his philanthropy, has come to view gifts to education as an important way to make a difference.

"I thought, 'Well, where does the money that I give do the most good?' I got to thinking that maybe if I gave to education, and helped education, that my money would go further," Jabs said. "I think I can do more good by giving to something like MSU."

Jabs hopes his gift will provide opportunities for students to receive a strong education so that they can compete well in a global marketplace.

"I think the entrepreneurship center opens doors. It makes students feel like there are other opportunities out there where they could be an entrepreneur, also."