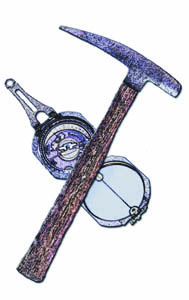 Scientific research on the geology of Mount Everest will be a significant component of the 2012 MSU expedition, as it was with the first American expedition to Everest in 1963 and all major expeditions before that. Mount Everest is a hostile environment to say the least, and the ability to conduct field work and collect samples is hampered by extremes in elevation, topography and weather. As stated by one highly respected and well-published Everest researcher (Searle, 1999), "For obvious reasons of extreme inaccessibility and danger, most of the rocks on Everest itself above 6000 m have not yet been directly studied…" Indeed, many of the outcrops of interest are in the so-called "death zone" above 25,000 feet (∼7,600 m). Therefore, although previous research in the Everest region has greatly advanced our knowledge of this complex area, much remains to be done.

Mount Everest is an extremely complicated mountain with several major faults that dissect it, tectonically juxtaposed rock successions of dissimilar age (some rock ages are unknown or weakly-constrained), and abrupt vertical changes in metamorphic grade and penetrative strain. It is anything but a simple "stack" of similar or identical rocks. Therefore, the research agenda for 2012 will be directed towards gaining a better idea of the mineral composition, strain and age of rocks that comprise the four-mountain Everest massif (Everest-Nuptse-Lhotse-Khumbutse). This will include collecting a suite of samples to better date and describe the fossil-bearing marine limestones that form the summit pyramid of Everest; studying the major faults that cut through Mount Everest to better understand how and when they formed (in particular, the Qomolangma and Lhotse detachment faults); and, hopefully, measuring a new GPS-based elevation of the summit of Mount Everest with the most modern and accurate equipment available from Trimble. 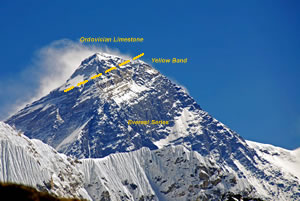 Mount Everest showing the summit pyramid (Ordovician limestone) above the distinctive "Yellow Band" (above the dashed yellow line). Everest Series pelites and quartzites comprise of the bulk of the mountain below the Yellow Band, of uncertain age (Cambrian?)..