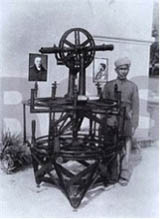 The widely accepted elevation of Qomolangma (Mount Everest) is reported to be 29,035 ft. (8,850 m). The first unofficial elevation of Qomolangma was reported to be 30,200 ft. by James Nicholson of the Great Trigonometric Survey of British India (ca. 1849-50), but this measurement was based on raw theodolite surveying data and did not account for optical aberrations. Subsequently, in 1856 the British Royal Geographic Society declared the elevation of Peak XV (as Everest was then called by the British surveyors) to be 29,002 ft. after several years of careful, redundant (to double-check accuracy) mathematical calculations to correct Nicholson's data for light refraction, barometric pressure, temperature and tidal effects. In fact, Peak XV was calculated to be exactly 29,000 ft., but to avoid people thinking that they had simply rounded-off or estimated the calculation, they added two feet to make the elevation look more believable. In 1955, an Indian theodolite survey conducted much closer to the mountain determined an elevation of 29,029 feet, which was widely accepted for many years thereafter. Then, in 1999 the National Geographic sponsored expedition directed by the famous American mountaineer and photographer, Bradford Washburn of the Boston Museum of Science, used GPS units simultaneously on the summit and South Col to establish a rock head elevation of 20,035 ft. (8850 m) and a snow cornice elevation 3 ft. (1 m) higher. This elevation is now shown on all maps by the National Geographic society and many others around the world. In 2005, the Chinese Academy of Sciences and State Bureau of Surveying and Mapping declared the bedrock elevation of Everest's summit to be 29,017.16 ft. (8,844.43 m), covered by an additional 11 ft. (3.5 m) of snow; these figures add up to the 1955 Indian measurement of 29,029 ft. (8,848 m). The depth of snow changes somewhat from year-to-year, so the actual high-point elevation of rock + snow on the summit knob is always in flux. Aside from fluctuating snow depth, is the bedrock elevation of Everest constant through time? The answer is no. Mount Everest is part of a dynamic tectonic environment created by the collision of India with Asia; this convergent tectonic regime is squeezing the lithosphere and uplifting the Greater Himalaya ever so slightly each year (several millimeters); the Everest region is even moving slightly to the northeast each year due to the relentless push of India.

About the images: Lambton's Great Theodolite, used by both William Lambton and George Everest during the Great Trigonometric Survey of India, weighed approximately half a ton and required twelve men to carry it. Although damaged several times during falls, it was rebuilt and is now housed at the Survey of India in Dehra Dun (Keay, 2000). 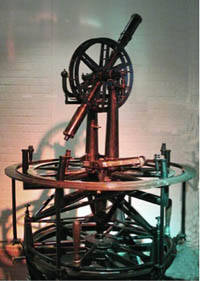