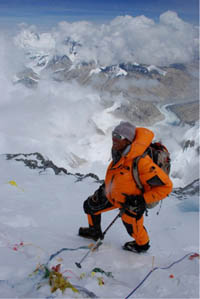 The summit of Mount Everest was actually the seafloor 470 million years ago! That's right, the rock that comprises the "summit pyramid" or uppermost part of Mount Everest is gray limestone that was deposited on the northern continental shelf of northern India during the early to middle Ordovician Period of the Paleozoic Era, long before India began its northward journey towards Eurasia and the eventual collision of tectonic plates that uplifted the Himalaya and Tibetan Plateau. Called the "Qomolangma Limestone" by geologists, the summit rocks are well-bedded limestone (grainstone) with fragments of common Ordovician marine invertebrate shells, such as trilobites, brachiopods, ostracods and crinoids. The Qomolangma Limestone has been altered by heat, pressure and fluids that have altered the original limestone, so it is now a low-grade metamorphic rock. These rocks have been brought to the roof of the world through continual uplift caused by the collision of India and Eurasia (still on-going today), deep erosion of the Greater Himalaya, and fault displacement along the South Tibetan detachment that has tectonically placed the summit rocks over higher-grade metamorphic rocks below. 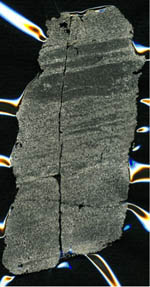 Top: Mountaineer Conrad Anker on the summit of Mount Everest showing outcrops of the Qomolangma Limestone jus down-slope from his boots. Bottom: Acetate peel of a sample of Qomolangma Limestone showing the well-bedded character of the rock, as well as its coarse grain size. Bedding dips around 15o NNE on the summit pyramid, but lessens to 15o along the flanks of the Rongbuk Glacier north of Everest (Myrow et al., 2009). The vertical crack is just that -- an open joint or fracture.