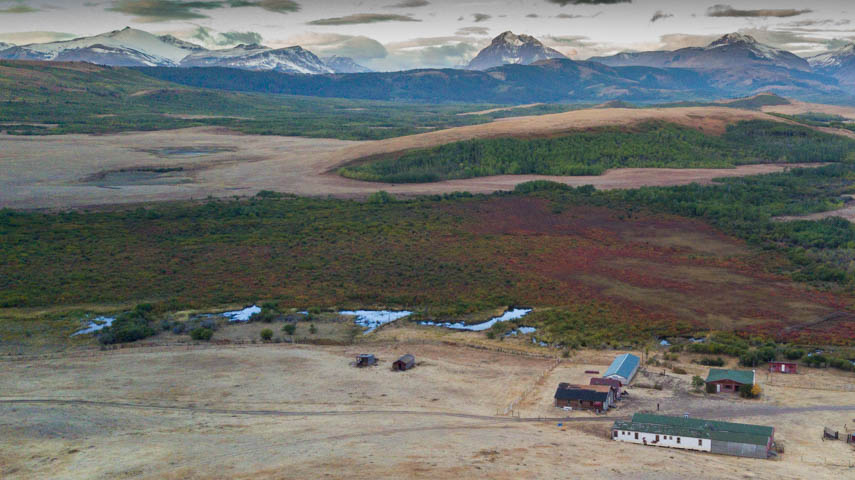 Blackfeet Indian Land Trust’s Mission: To preserve native plants and animals and perpetuate a respect for the land consistent with the culture and heritage of the Blackfeet Nation/people, through conservation of lands and water.

The Yellow Bird Woman Sanctuary envisions a reconnection to place through the community. Literally, the term sanctuary refers to refuge or a reserve. However, Piikani people seek to enhance the power of place through engagement of mind, body and spirit. Therefore, we must remind ourselves that the Yellow Bird Woman Sanctuary serves as refuge for the human to heal past trauma by acknowledging those necessary relationships that cross boundaries intended to reserve or limit access of all species. Through education and transfer of traditional ecological knowledge we can grow lasting partnerships that will sustain the long-term commitment needed for adaptation and change that impacts the future of soyitapisks (water beings), sakoomitahpisks (land beings), and spomiitapisks (sky beings).

The Yellow Bird Woman Sanctuary was founded for the mutual well-being of Amskapi Piikani land and people. Here, the late Elouise Cobell (ōt"kwaipiiksaakii ) envisioned bringing the land and the people together, and hoped that the Sanctuary would be protected by and for her people as a place of natural wonder and abundance. It is one part of her enduring legacy.

The Sanctuary is held by the Blackfeet Indian Land Conservation Trust Corporation (BILCTC)—the first on-reservation Native American land trust in the nation. Also known as BILT, the Blackfeet Indian Land Trust is a 501(c)(3) non-profit. Land trusts like BILT can acquire properties that are prioritized for protection by raising money to purchase them, then placing such properties under conservation easements, and holding the land in a protected status in perpetuity... forever.

The Amskapi Piikani homelands hold some of the most pristine water in the United States. The Sanctuary property was prioritized for protection because of a precious natural water system known as a glacial fen, a groundwater-fed wetland in which nutrient-rich water is constantly being drawn up from the earth to feed the plant and animal nations at the surface. The water system is valued for the way that it supports a diversity of life. Conservation biologists have recognized that the fen contains rare species and species new to science. Situated in this semi-arid mountainous habitat, the fen is especially vulnerable to climate change and hydrologic alteration.2 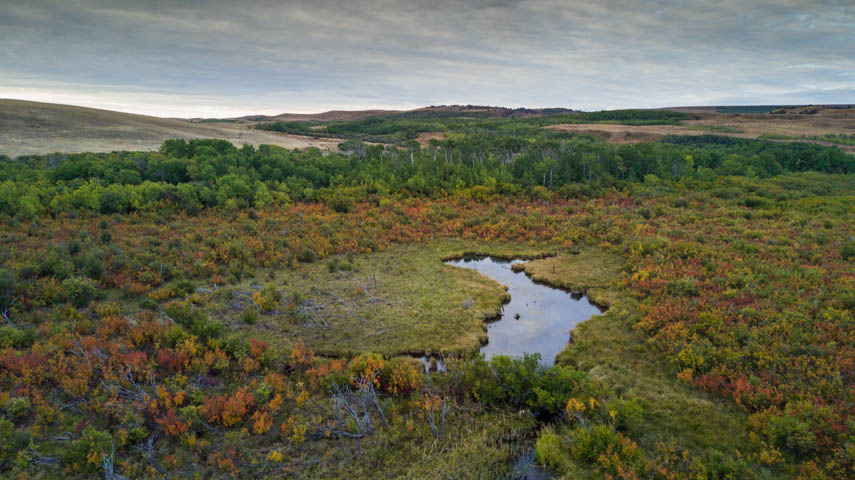 The Blackfeet Indian Land Trust was a dream born of a dynamic partnership between Piikani tribal members and The Nature Conservancy. This dream originated with Elouise’s effort to re-establish trust as a concept involving land and people, just as she had significantly pursued trust in the class-action lawsuit against the U.S. federal government for its breach of trust around Indian land and money.

Elouise served on the board of the Montana Nature Conservancy for over a decade. “The more [Elouise] got involved with The Nature Conservancy, the more Elouise learned about the land trust model and saw it as a way to advance her restorative-land ideas for the community.” (Grant, 5) In her shared work with other board members, she formed lasting relationships with trusted allies, like Jim Scott, chairman of the First Interstate BancSystem, and Jamie Williams, former Director of the Montana Nature Conservancy. Elouise shared with them her vision of an independent and enduring institution, outside of tribal governance, that would be well positioned to “springboard back to the stewardship we had years ago as the first environmentalists.” (Grant, 8)

With the assistance of The Nature Conservancy, the Piikani were able to “bring the land back” and accomplish something rare—formulating the first land trust in the country on an Indian reservation. Prior to becoming Yellow Bird Woman Sanctuary, the property was known as Flatiron Creek Ranch, or simply the Scriver Ranch (as it is still known today). It was owned by Bob and Dorothy Lorraine Scriver from the 1950’s until 2001 when it was purchased by The Nature Conservancy (TNC) and then transferred to BILT. 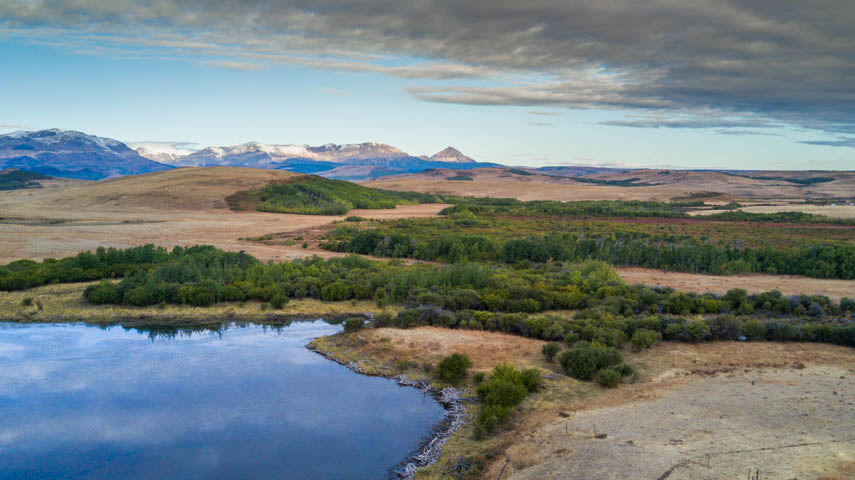 BILT’s first board of directors —Elouise Cobell, Earl Old Person, Donald DuBray, Jim Scott and Jamie Williams—established a long-term goal: “to find ways of securing conservation easements on threatened lands that protect important habitat while making it possible for either the Tribe or individual Indians to purchase property at an affordable price.” The Nature Conservancy’s larger conservation efforts, which protect multiple properties along the Rocky Mountain Front, helped build funding support for the purchase of the Flatiron Creek Ranch property. Elouise built a broad network of support on and off the reservation, wrote grant proposals, and recruited human resource capacity from educational institutions— creating conservation documents and educational curricula.

In 2003, as part of his graduate thesis work at Yale’s Forestry and Environmental Studies program, Jason Wilmot developed the “So-keeps-kim” Flatiron Creek Ranch Conservation Management Plan (saakkiippsskim being a Blackfeet translation of what is now called Flatiron Creek, the creek that runs through the property and helps to feed its glacial fen).

In 2016, Anne Grant, the University of Montana’s first Cobell Fellow, produced “A Written History of the Blackfeet Indian Land Conservation Trust Corporation” (upon which this summary is based), and an educational curriculum for use with the film “100 Years: one woman's fight for justice.”

At the 2013 dedication and renaming of the Sanctuary, BILT board member and Blackfeet Nation Vice-Chairman Terry Tatsey said Elouise had “worked continuously with many people to secure the land and develop management plans” for its future. Elouise worked to find people she knew she could trust and with whom she could collaborate for the good of the land and the people. Her partnerships with The Nature Conservancy and the U.S. Fish and Wildlife Service were built on trust and respect for conservation.

The Yellow Bird Woman Sanctuary is to be permanently protected in a natural state in a manner that meets the expectations and needs of the Blackfeet People.3 The Sanctuary is a living legacy for the Blackfeet—a place where educational and cultural programs held by the Native Science Field Center give Blackfeet youth an opportunity to build upon the inter-relationships that exist among the spiritual, natural, and human realms; and to learn traditional Piikani as well as Western principles of ecology. Land planning by Piikani people for the Yellow Bird Woman Sanctuary is ongoing and shared by the community.

Elouise summarized the essence of her work in establishing The Yellow Bird Woman Sanctuary in this statement:

I will never chop down a lone tree. People have beauty within their spirit, no matter what they look like. Birds have special powers. Remember throughout life, you have a lot of power, but there are certain parameters you have to stay within. You can’t take anything for granted anymore. (Grant, 36)

This summary history is based on the meticulous work of Anne Des Rosier Grant who, as the first Cobell Fellow at the Elouise Cobell Land and Culture Institute at the University of Montana, wrote an extensive narrative report on the development of the BILCTC and the Yellow Bird Woman Sanctuary. Ms. Grant also produced a comprehensive curriculum around the recent film, “100 Years: one woman’s fight for justice.” The curriculum can be found at The Montana Office of Public Instruction.

All aerial images used in this article belong to the Amskapi Piikani (Blackfeet Nation) and were captured by Native Land Project member Christopher J. Carter.

The Nature Conservancy’s Blackfeet Indian Reservation page and 2013 Annual Report on TNC’s work in Montana.
Transcript of a 2017 speech by Jim Scott speaking to the origin of BILT and the living legacy of Elouise Cobell [LINK] .