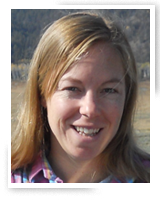 Wildfire regimes have shifted over time in response to both climate and humans.  Historically humans have both increased fire frequency by using it as a tool for clearing land and decreased fire frequency by instituting fire suppression policies.  Recently humans have had a more indirect effect on fire regimes by introducing nonnative plants that can change the fire frequency or intensity in their introduced region.  My research will focus on examining the interactions between nonnative plants, fire regimes and climate.  We hope to combine fire models and field data to predict changes in fire regimes as both plant distributions and climates change in the future.

Specifically, I am examining two species that prosper after fire and reportedly have the capability of changing the fuel dynamics when they invade a new area.  In the sagebrush steppe of the Upper Snake River Plain in Idaho, I am examining the response of cheatgrass (Bromus tectorum) to a range of fires that occurred between one and 16 years ago.  It is believed that cheatgrass creates a positive feedback loop with fire by increasing fine fuels and fuel continuity, thus increasing fire risk, and then increasing in abundance after fires.  This cycle has been seen in heavily grazed areas throughout the Great Basin where cheatgrass is common.  I hope to determine if the same cycle exists in less disturbed sagebrush steppe.

My second study species, lodgepole pine (Pinus contorta), is an aggressive invader in New Zealand and Patagonia, however it is native here in Montana.  It is also a fire adapted species that can create dense stands with high woody fuel loads that may increase fire intensity.  Lodgepole is invading shrub steppe and grassland in the Southern Hemisphere, whereas there are many sites in the Greater Yellowstone Area where lodgepole stands do not invade sagebrush or grassy meadows.  My research aims to determine what factors prevent invasion into Montana meadows yet allow invasion in the nonnative range and how this relates to fire.