Fiscal Policy and the Pandemic: Unprecedented Action and Missed Opportunities

A Distinguished Lecture by Christina Romer

Professor of Economics at the University of California, Berkeley and former chair of the Council of Economic Advisers

The Covid-19 pandemic has stressed the economy almost to its breaking point—dwarfing even the 2008 financial crisis in its economic devastation. As in 2009, policymakers have sought to use fiscal policy—stimulus payments, business tax cuts, and increased unemployment insurance—to cushion the impact of the virus.

One of the world's leading scholars on economic crises—and how to solve them—and a key adviser to President Obama through the economic crisis, Christina Romer will compare the fiscal responses to the two crises and draw lessons for future fiscal actions. In addition to discussing what worked and what didn’t, Professor Romer will provide an insider's view of some of the missed opportunities for more effective fiscal policy in both episodes. 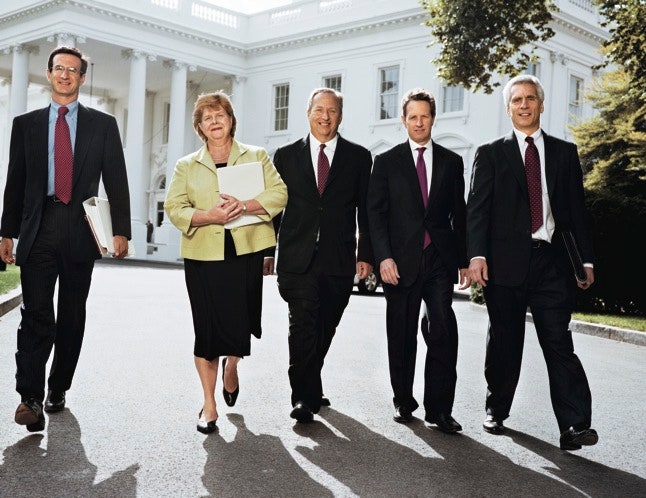 The advisers who meet with President Obama daily to discuss the economy: Peter Orszag, Christina Romer, Larry Summers, Timothy Geithner, and Jared Bernstein.Photograph by Martin Schoeller for the New Yorker.

Romer, who served as chair of the Council of Economic Advisers in 2009 and 2010, was one of the four economics principals who met daily with President Obama to design and guide the Administration's response to the Great Recession. She played a key role in macroeconomic policy, the rescue and reform of the financial system, health care reform and budget policy. In addition, she was a primary Administration spokesperson on the economy, appearing frequently on the evening news, in the financial press and on the Sunday morning news programs.

An expert on economic history and macroeconomics, including the Great Depression and the impact of fiscal and monetary policy, she helps audiences understand what is ahead for the economy including the roots of our current economic problems, the challenges and stresses that policymakers should be addressing and the likely impact on economic growth. Her presentations are customized for each audience, and blend a lively and enthusiastic delivery with an easily accessible discussion of important economic challenges and policy options.

In addition to being an award-winning Professor of Economics at the University of California, Berkeley, she is also the co-director of the Program in Monetary Economics at the National Bureau of Economic Research and a Contributing Editor for Bloomberg News.

The MSU Initiative for Regulation and Applied Economic Analysis hosted Professor Christina Romer as its annual distinguished lecturer on Thursday, Sept. 17, 2020, 6 p.m. MST. Her talk was delivered virtually at montana.edu/regecon