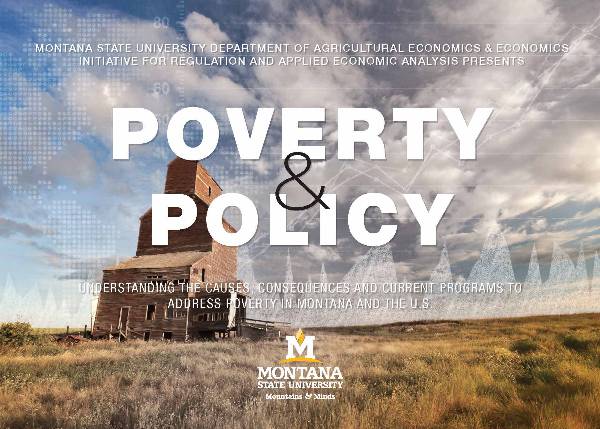 Understanding the Causes, Consequences, and Current Programs to Address Poverty in Montana and the U.S.

“Our aim is not only to relieve the symptom of poverty, but to cure it and, above all, to prevent it. No single piece of legislation, however, is going to suffice.” - President Lyndon Johnson, 1964 State of the Union Address

Although the U.S. poverty rate declined from near 20% to near 10% in the first few years after President Johnson declared War on Poverty 52 years ago, progress against poverty since then has been minimal at best. Despite spending nearly $1 trillion annually on dozens of poverty-reduction programs, the U.S. poverty rate has hovered between 10 and 15% for the last 50 years. Montana is no exception to these national trends, with the latest Census data indicating that our poverty rate was 14.6% in 2015. Poverty is much higher on our reservations, where more than 1 in 3 people live in poverty.

Attendees will leave the conference with a deeper understanding of the causes and consequences of poverty, the impact of the myriad policies designed to help the poor, and the prospects for effective policies aimed at reducing poverty moving forward.