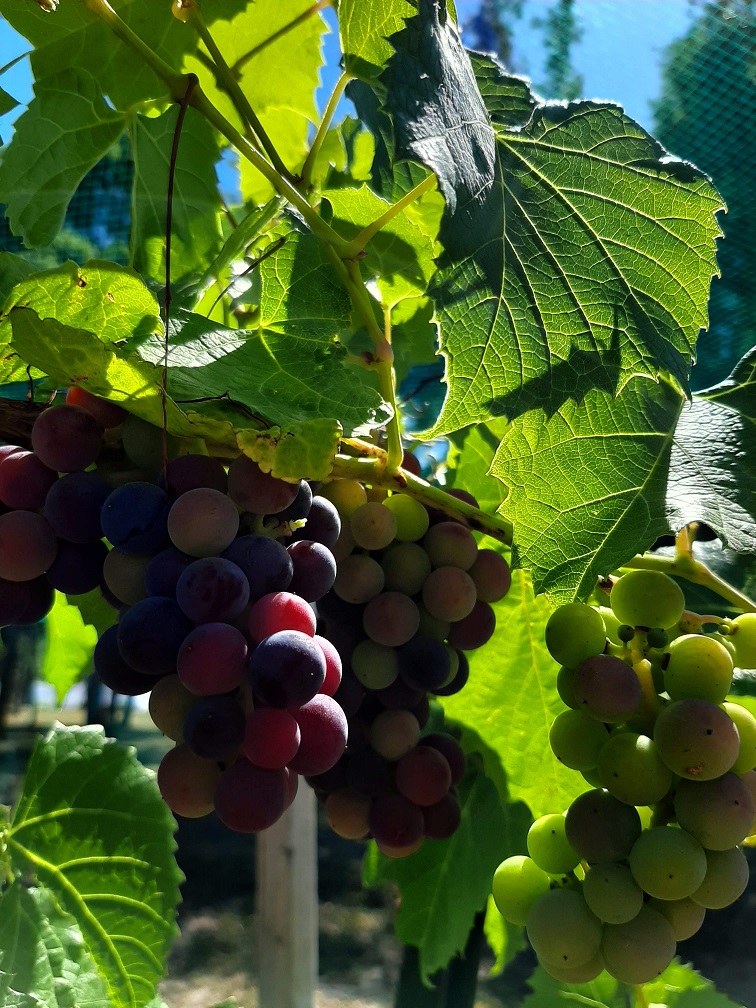 MSU's experimental vineyard, located at the MSU Horticulture Farm west of Bozeman, was established to trial cold-hardy grape varieties. It was planted in 2010 with canes from the USDA grape germplasm collection in Geneva, New York, and contains 19 varieties of cold-hardy grapes. All vines are on their own rootstock.

The grape varieties included in the MSU vineyard are listed below, along with information on berry color and the typical use for each variety. USDA hardiness ratings are based on the average minimum temperature that the plant can withstand. The Bozeman area is rated Zone 4, which means that the average annual minimum winter temperature is -20 to -25 degrees Fahrenheit. Lower hardiness ratings mean that plants are more cold-hardy. For more information on plant hardiness, visit the USDA's hardiness zone website.

There are currently no active research projects in the vineyard, but vines are being maintained and some general information from the past four growing seasons is listed below. Data points tracked include leaf break on vines, bloom date, veraison (when the grapes start to ripen), harvest date and yields, and Brix content of berries at harvest. Brix content, measured in degrees Brix (°Bx), is the measure of sugar content in berry juice.

MSU's Western Agricultural Research Center, located in Corvallis, has also done extensive research on cold-hardy grapes in western Montana. Many of the varieties found at the Horticulture Farm are also included in WARC's study. For more information and research results, check out their research on grapes in Montana.

*A hard freeze on the night of June 11 killed most of the new growth on the vines and greatly affected production over the 2018 season. The arrival of freezing fall temperatures also dictated the harvest (September 25) of grapes, even though not all varieties had reached desired Brix levels. Only varieties with grapes ripe enough to harvest are listed in the table above; multiple varieties did not recover in time to produce edible berries, and unripe clusters were not harvested or included in the data.

*As in 2018, cold spring weather and a cool summer greatly affected the grape vines and reduced crop yield on all varieties except Valiant, and the arrival of freezing fall temperatures dictated the harvest of grapes on September 27. Only varieties ripe enough to eat (°Bx>12) were harvested, and unripe grape clusters were not harvested either.

*Early freezing temperatures in October 2019 damaged or killed many of the vines, resulting in a somewhat slow start to the 2020 season and reduced yield on most varieties (Valiant seems to have been the exception). However, warm fall temperatures allowed for a later harvest than in past years and resulted in improved Brix content at harvest.

*Abrupt freezing temperatures in October 2020 and unpredictable weather over the winter resulted in high vine mortality. Valiant was the only variety with a 100% survival rate, and surviving vines produced fewer grapes than in previous years. However, hot weather over the summer sped up development and resulted in higher Brix contents at harvest than years with similar harvest dates.

The Horticulture Farm vineyard has a large enough footprint that it is not practical to cover the vines in response to cold temperatures. However, home growers with a limited number of vines could potentially cover their vines at night in spring to protect against late frost damage, and again in fall to extend the season and further ripen grapes. Another option if only light frost is expected (in spring or fall) is to run sprinklers on the grape vines overnight. This will coat leaves and shoots with a thin layer of ice and insulate them against frost damage. (This technique was used successfully several times during the 2020 growing season.)

Based on several years of observations, the following grape varieties appear to be the most cold-hardy and productive in the Gallatin Valley: