A look at EHHD research and scholarly recognition during 2015-2016 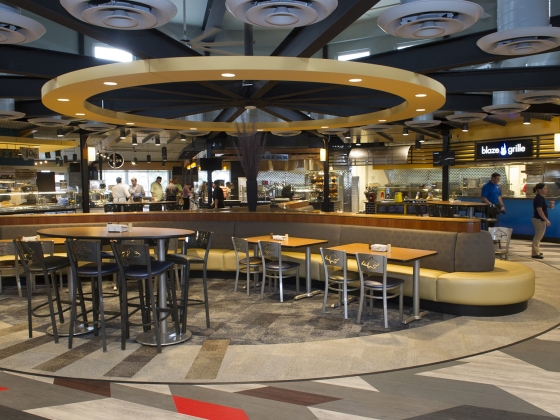 A team of Montana State University faculty members, students, and staff have found that changes to the university’s recently renovated Miller Dining Hall have reduced food waste by more than 50 percent and improved campus sustainability.

Those changes include using smaller serving utensils, serving smaller portion sizes, using smaller pans of food on the buffet and creating signs that state the amount of food that is wasted, according to Carmen Byker Shanks and Selena Ahmed, assistant professors in the MSU College of Education, Health and Human Development’s Department of Health and Human Development, who facilitated the study along with Alicia Leitch, a graduate student in health and human development.

“The study findings suggest that small or large modifications in the food environment can change what and how much consumers eat and waste,” said Byker Shanks. Read more about this study here. 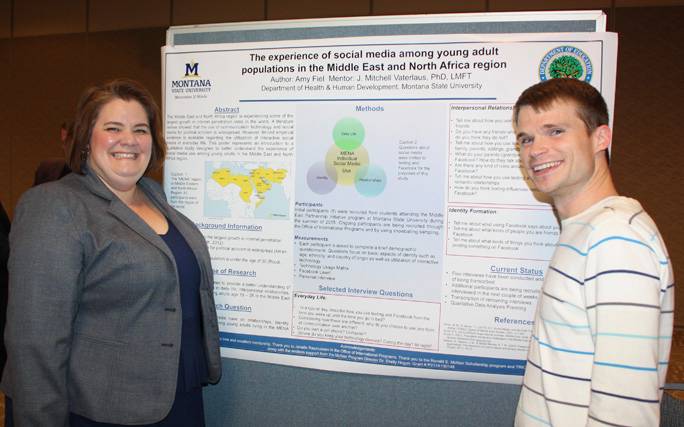 Eight students from the College of Education, Health and Human Development presented their research at the 6th annual McNair research symposium held at Montana State University. Out of the 25 McNair scholars, one-third were from the College of Education, Health and Human Development. The scholars worked with faculty mentors to research topics of interest, create a poster of their findings, and present at a public forum where attendees could ask questions about their research topic. Each year, 25 students are selected who are either first-generation/low-income or traditionally underrepresented minority students. Students have strong academic potential and are committed to attending graduate school. The program is named for Ronald McNair, a NASA astronaut and physicist who died in the Challenger explosion in 1986. The program was established by Congress in his honor. Students presenting were Amy Fiel, family and consumer sciences; Heidi Hanson, community health; Erica Latorre, exercise science; Rebekah Lindsey, elementary education; Jaycie Loney, exercise science; Dietrich Perchy, general science broadfield education; Wade Robinson, exercise science; and Kendra Teague, sustainable food systems. 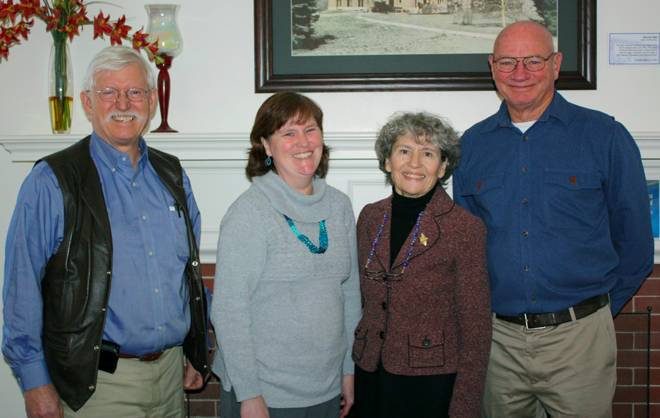 Holly Hunts, associate professor in family and consumer sciences and the Department of Health and Human Development’s Outstanding Professor in Service for 2016, is a member of a group of colleagues from four colleges who share a common interest in food, agriculture, nutrition and health. Professors David Sands and Florence Dunkel from the Department of Plant Sciences and Plant Pathology and Ed Dratz from the Department of Chemistry and Biochemistry meet on a regular basis to look at “wicked problems,” which Hunt defined as “complex problems that are intertwined and entangled with other problems.” The group shares several wicked problems in the area of nutrition that their research has addressed, such as the effects of Omega 3 on brain function, feeding cows and chickens Montana grown camelina to increase Omega 3 levels, and the correlation of malnutrition and malaria in Africa.

Under Dratz’s direction, high school students in Columbia Falls, Montana, conducted a study on the effects of Omega 3 diet supplementation on the brain. Through a double blind experiment with their classmates, they found evidence that supplementing diets with Omega 3 increased brain function. Good sources of Omega 3 are walnuts, canola oil, walnut oil, ground flaxseeds and its oil, camelina, and camelina oil.

Hunts said, “While walnuts and flaxseed are good sources of the short chain ALA Omega 3, the larger message is that it is the long chain DHA Omega 3 that is needed in our diets. Some good sources for the long chain Omega 3s are fish, grass fed animals, and animals (and their milk and eggs) that are fed diets high in short chain Omega 3s like camelina.”

Sands cited MSU research that fed camelina to cows and chickens and found that it increased Omega 3 levels in their meat and eggs. This research could be a model for industries to move away from processed foods high in Omega 6, a fatty acid that contributes to inflammation leading to chronic diseases, to healthy Omega 3.

Working with village women in Mali, a country in western Africa, Dunkel has helped improve nutrition in children, who can be very susceptible to malaria when malnourished. Through creating cottage industries and participating in nutrition education workshops, mothers now provide healthy, more nutritious meals to their children, and malaria has dropped dramatically.

While transdisciplinary teams are more effective in solving wicked problems, they also allow for better implementation of ideas that can be sustained. 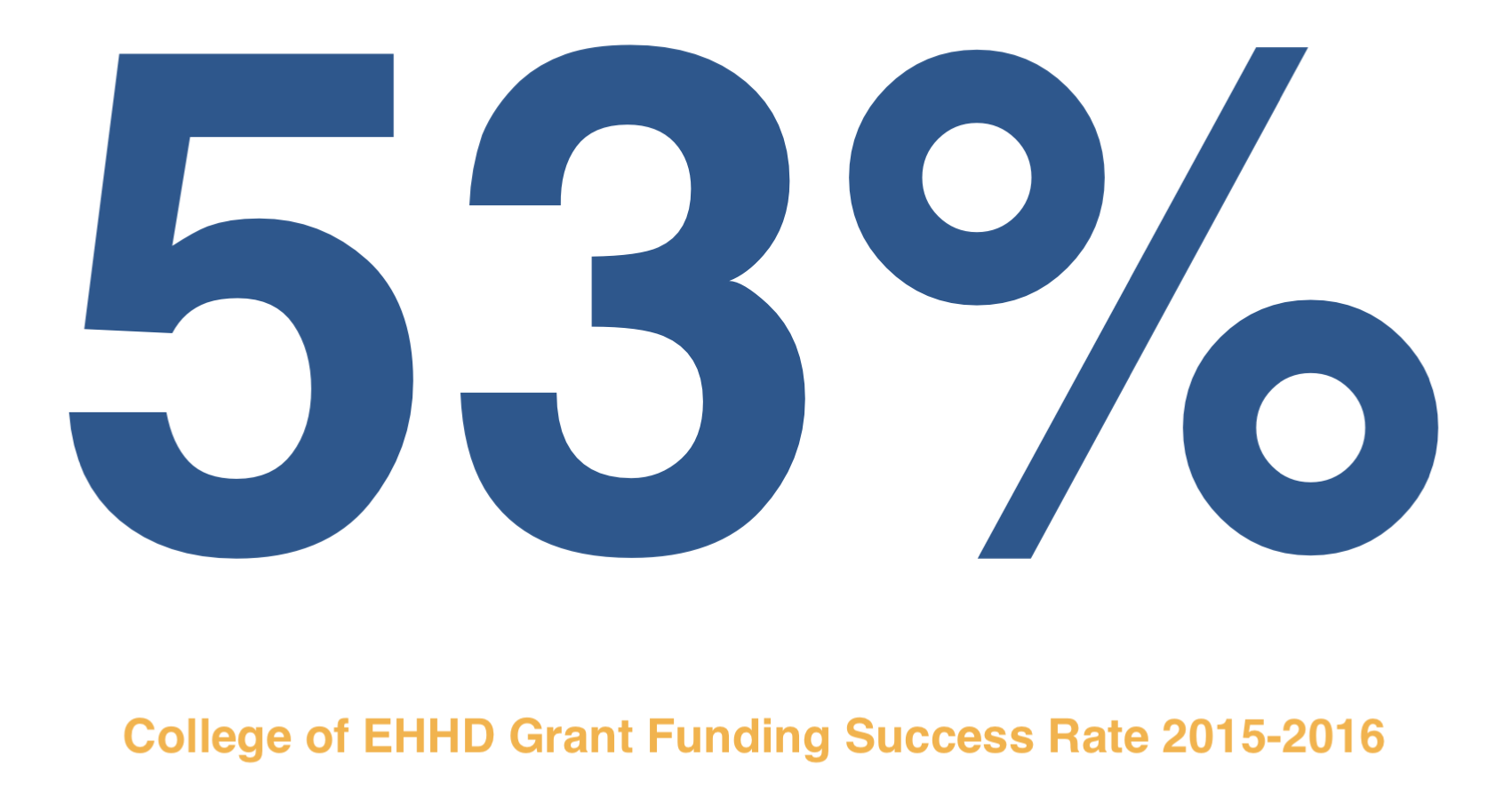 A team of Montana State University researchers and community partners has been awarded a three-year, $220,000 grant to help Montana beef producers and meat processors and increase the use of local beef in Montana’s schools and communities.

The grant, from the U.S. Department of Agriculture’s Western Region Sustainable Agriculture Research and Education Program, is intended to increase the availability and consumption of local beef in Montana’s schools and communities and help improve Montana beef producers’ and meat processors’ viability and sustainability. It is also intended to discern which “beef to school” methods are most sustainable for producers, processors and schools.

The Beef to School Project is led by Carmen Byker Shanks, assistant professor in the MSU Department of Health and Human Development.

In Montana and nationally, producers and consumers are beginning to see social, environmental and economic benefits from local procurement efforts that link ranchers and local beef processors with schools in their community and region, according to Byker Shanks. She added that the ‘beef to school’ efforts involve support of local beef from a variety of people, including producers, processors, and foodservice and students at K-12 schools. Read more here.

The Piikani Digital History project began in the spring of 2013 when education professor Christine Stanton visited with MSU doctoral student Brad Hall, who was working with his high school students on recording digital histories for their history class at Heart Butte High School. Stanton was so inspired by the project that she volunteered some of her start-up money toward purchasing much needed equipment and began a collaboration with Hall. That collaboration led to a partnership with assistant professor, Lucia Ricciardelli, in the School of Film and Photography at MSU.

“The goal of the project is to develop a model for digital history research and education with tribal and rural communities across the region,” said Stanton.

Hall has since moved to a position at Blackfeet Community College (BCC) where he is continuing the Piikani Digital Project with students there. Students, staff, and faculty members from BCC have traveled to MSU for workshops, which provide a dual purpose with MSU students from film and photography. After forming teams, film and photography students acted as mentors providing guidance regarding documentary film techniques and options. In return, BCC students provided cultural mentorship and guidance in how to appropriately represent knowledge keepers and their stories. MSU students traveled with Stanton and Ricciardelli to Browning for additional workshops.

A variety of documentaries are being produced or have been completed. For one project, students interviewed attendees of a pow wow on the topic of restoring their native language. For another project, students interviewed a respected elder who has been inducted into the Cowboy Hall of Fame. Stanton said that how the videos will be used is up the Blackfeet tribe. In addition to the films, outcomes of the project include new understandings related to culturally responsive pedagogy, community-based participatory research, and Indigenous research methodologies as applied by student scholars. Stanton, Hall, and Ricciardelli have co-authored a chapter for a forthcoming book on oral history education and are in the process of preparing articles and conference proposals based on implications for researchers.

Walk across campus on any given day and you will see students checking their phones. Walk through any building and you will see students sitting at tables staring at computers or tablets. According to Mitch Vaterlaus, assistant professor of family and consumer sciences, “young adults between the ages of 18 to 25 spend more time with media and technology daily than any other activity.” They can spend up to 11 to 12 hours a day with technology and frequently use social media to facilitate social interaction.

Vaterlaus has published extensively in journals on his research on the perceived influence of interactive technology (e.g., social media, texting, video chat, email) on young adult behaviors. Two recent articles focused on young adults’ perceptions of interactive technology and health behaviors (i.e., diet and exercise). Using data collected through eight focus groups and four individual interviews, Vaterlaus and a graduate students, Emily Patten from the University of Nebraska Kearney and Cesia Roche from Kansas State University, identified emerging themes: social media can be both a barrier and a motivator for exercise; social media can help expand food choices through creating access to a variety of recipes and provide a venue for showcasing food they prepare and eat; but it can also distract them from making healthy food choices.

Vaterlaus received a seed grant from the College of Education, Health and Human Development to expand his research in examining the influence of technology on college students’ diet and exercise through the first year of college.

Technology is changing so fast with the development of new technology, noted Vaterlaus, so this is an emerging and rapidly evolving area of research. 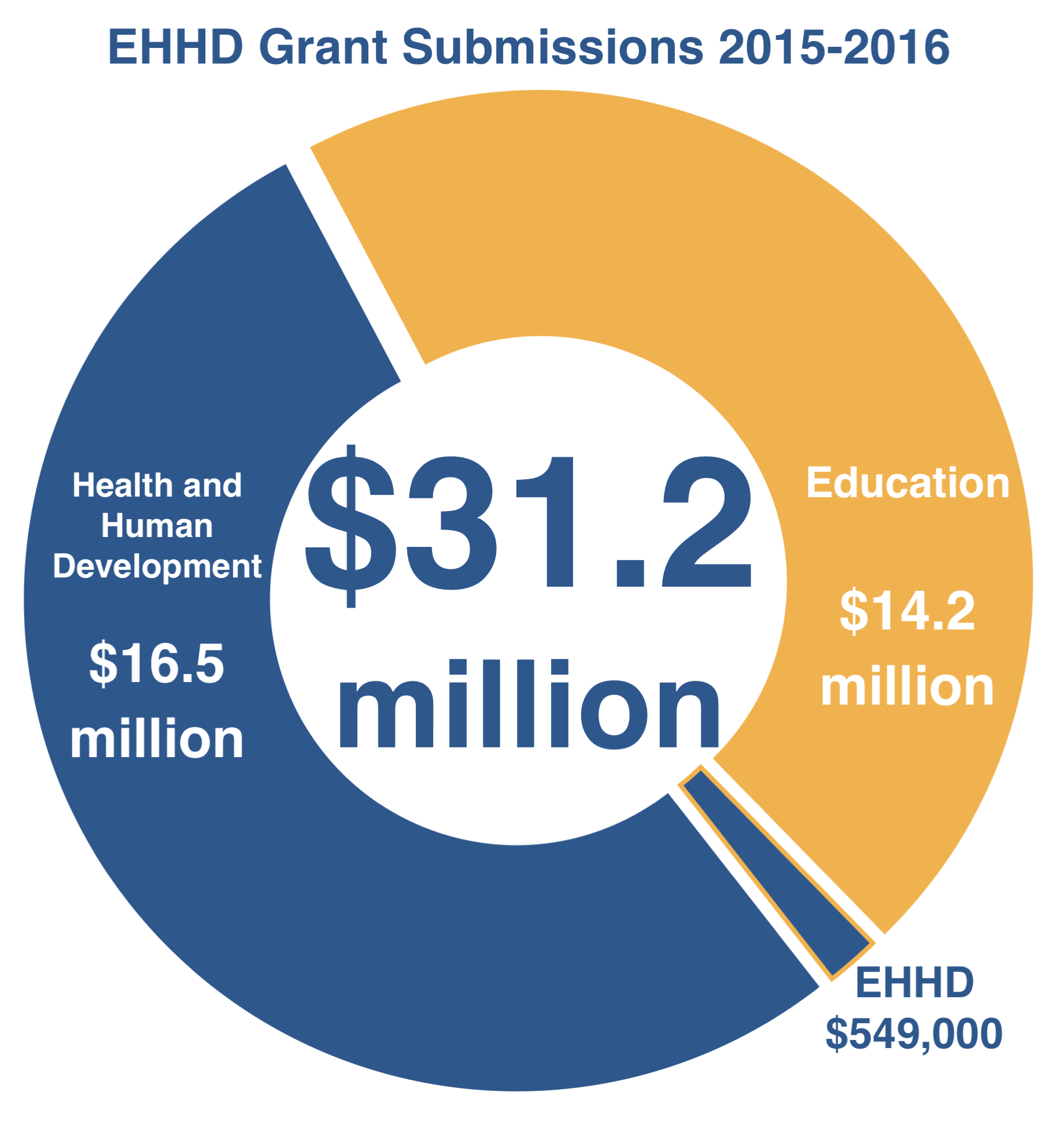