From its eagle-feather roof to furniture made by students from timber harvested on site, there’s no shortage of things to engage those who enter MSU’s American Indian Hall. Explore the features below to see what makes this extraordinary building unique. 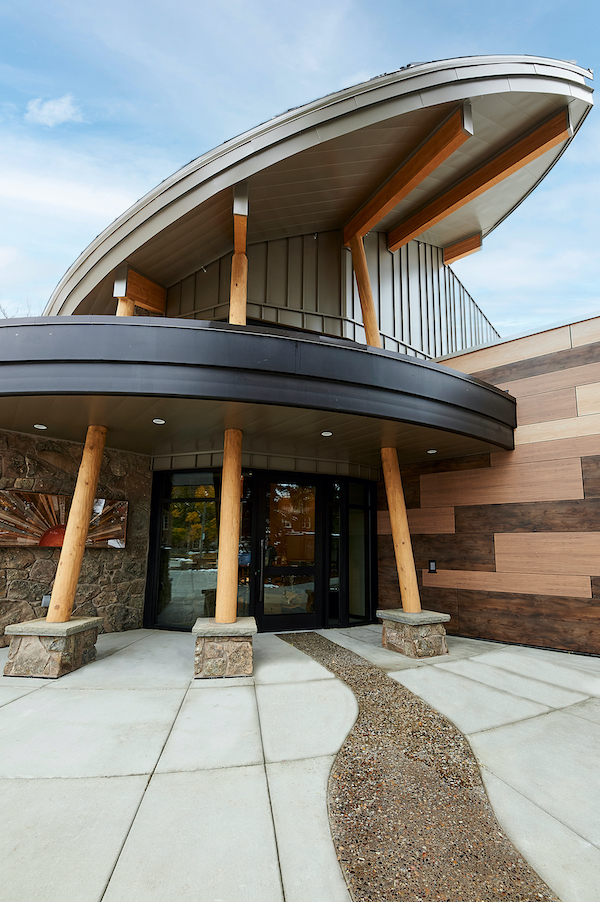 According to Native beliefs, the East is associated with enlightenment and new beginnings. It is appropriate that the American Indian Hall stands on the East Door to campus as this is a place of honor. Traditionally, villages opened to the East and visitors to our camp circles entered from that direction. Thus, the American Indian Hall welcomes our guests to campus on behalf of Montana State University.

Rivers Run Through It

Just as three great rivers define this area of Montana, blue-stained concrete flooring in American Indian Hall represents the Gallatin, Madison and Jefferson rivers and their confluence at the headwaters of the Missouri River. The Gallatin River leads visitors into the building from the eastern door and the rivers merge in the Great Hall to form a representative Missouri River.

The American Indian Hall is surrounded by Indigenous gardens composed of medicinal, ceremonial and edible plants that provide a learning landscape. Among the plants found in the gardens are foods that the peoples of the northwestern plains and northern Rockies have cultivated and traded, including corn, beans, squash and sunflowers. The garden is a space for nurturing the recovery and continuation of cultural knowledge of food cultivation by Native students and their communities. 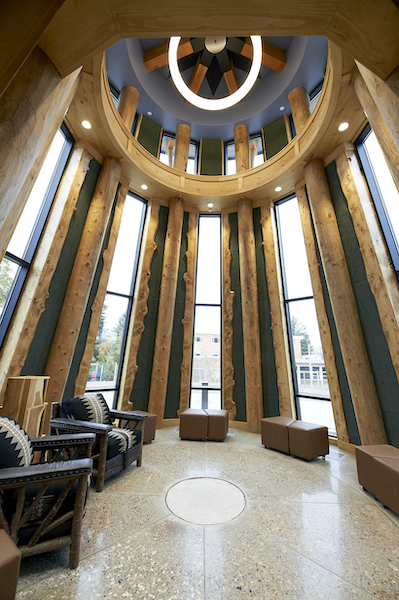 Some tribal beliefs view the drum as a spiritual guardian and living being that must be respected. As a living entity, the drum must be cared for even when not in use. The Drum Room serves as both a practice room (with acoustic abatement) and a space of cultural importance where the drum can be stored properly.

The work of three artists engages visitors at the gallery entrance of the American Indian Hall, which faces southwest toward the core of campus. The public art inspires deeper thought and reflection on the major themes and natural elements revered by many Indigenous cultures. The artists include Bently Spang, a member of the Northern Cheyenne Tribe, Robert Martinez, a Northern Arapaho artist, and Stacia Goodman of Minneapolis.

When developing a design concept for MSU’s American Indian Hall, Dennis Sun Rhodes proposed several Native American themes, but the one that was most resonant to him and the MSU Council of Elders who approved the design was the eagle feather. Not only are bald and golden eagles common in Montana’s Gallatin Valley, but Sun Rhodes also said that eagles, with their ability to fly high into the sky, are believed in Native American cultures to be the communicators with the creator.

In 1970, Jim Dolan and Dennis Sun Rhodes became roommates at Montana State University. They were an unlikely pair: Jim, an outgoing agricultural education major from California, and Dennis, a quiet architecture student and Northern Arapaho who was raised on the Wind River Reservation in Wyoming. In 2004, the two friends approached Dr. Geoffrey Gamble, then President of MSU, with an idea to build an American Indian Student Support building to serve the growing population of Native students attending MSU.

In 2010, Dr. Waded Cruzado was sworn in as the 12th President of Montana State University and reaffirmed the importance of an American Indian Student Center. She reestablished a building committee and the building was added to the long-range plan.

Flash forward to today, and the American Indian Hall is a dream fulfilled thanks to the persistence, generosity and support of those who believe in the value of education.

Incorporating the original building concepts, ThinkOne Architecture was the architecture firm for the project, rendering the final design.