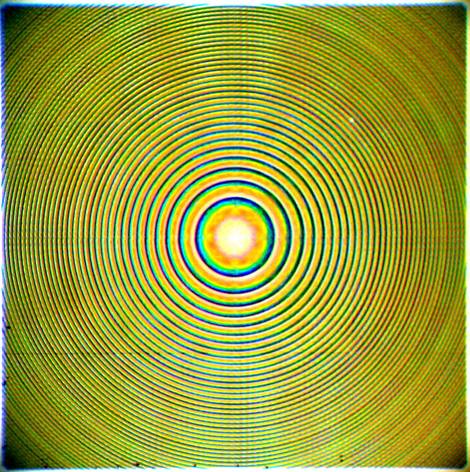 The variation in material composition is accomplished by etching a pattern of holes into a silicon wafer, and then oxidizing the wafer at elevated temperature in a steam atmosphere to convert exposed silicon into silicon dioxide – filling up the holes in the silicon with silicon dioxide “plugs”. If the pattern of holes has a period much smaller than the optical wavelength, no diffraction from these features is possible and the material takes on an average “effective index of refraction” that can be adjusted by changing the pattern of the holes. In this microlens the etched holes are 160 nm in diameter, which produce 214 nm diameter silicon dioxide plugs after oxidation. The hole period is everywhere smaller than 700 nm.