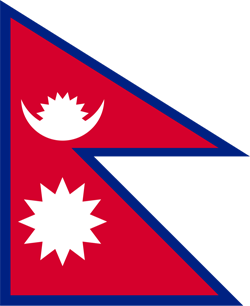 The national flag of Nepal is the world's only national flag that is non-quadrilateral in shape. The flag is a simplified combination of two single pennons, the vexillological word for a pennant. Its crimson red is the color of the rhododendron, the country's national flower. Red is also the sign of victory in war. The blue border is the color of peace. Until 1962, the flag's emblems, the sun and the crescent moon, had human faces. They were removed to modernize the flag. The faces remained on the sun and the moon on the Royal Standard until the abolition of the monarchy in 2008.

The blue border symbolizes the peace and harmony that has been prevalent in the country since the age of Gautama Buddha, who was born in Nepal. The crimson red is Nepal's national color, and it indicates the brave spirits of the Nepalese people. The two triangles symbolize the Himalaya Mountains and represent the two major religions, Hinduism and Buddhism. The red triangular flag has been a Hindu symbol of victory since the time of Ramayana and Mahabharata. The depiction of celestial bodies represents permanence, the hope that Nepal will last as long as the sun and the moon. The moon symbolizes that the Nepalese are soothing and calm, while the sun symbolizes fierce resolve. The moon also symbolizes the shades and the cool weather of the Himalayas, whereas the sun symbolizes the heat and the high temperature at the lower part of Nepal. Another interpretation: The flag's shape symbolizes a Nepalese pagoda. Putting a mirror at the side of the flag closest to the flagpole will generate an image of a pagoda.