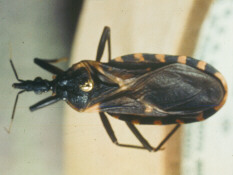 Chagas' disease continues to be among the most important diseases in the tropics and subtropics of North and South America. According to the World Health Organization, 25% of the total population in Central and South America is at risk. There are 1 million cases per year with more than 45,000 deaths. Currently, there are between 16-18 million people infected.

Chagas' disease was first identified by Carlos Chagas in Brazil in 1909. The causative organism is the protozoan, Trypanosoma cruzi. Its life cycle is dependent upon both a mammalian and hemipteran (true bug) host. The protozoan is carried in the hind gut of the conenose bug and passed to humans and other mammals while the insect feeds on blood. However, the disease organisms are not passed through the bite, but rather through the feces of the bug, which defecates on the victim's skin during blood feeding. The protozoans are then transferred from the insect feces to the host via scratching of the skin or entry into the conjunctiva of the eye or the mucosa of the nose or mouth. The site of infection, which is the most apparent external sign of the disease, is characterized by a unilateral swelling on the face or eyelid, or other site on the body. This swelling, or "chagoma", is known as the sign of Romana.

Once in the human blood stream, the incubation period is about 1 to 2 weeks. Then, moderate to high fever and edema of the body may occur. In some cases, nervous disorders occur, especially in small children. After four weeks, if the victim survives, the disease stabilizes and enters a long equilibrium phase known as the chronic phase. During this phase, which may last 10-20 years after the initial infection, the trypanosomes invade and destroy cardiac, integumentary, and nervous tissue. The victim may develop cardiopathy, chronic digestive lesions, and neurological disorders. Patients with severe chronic disease may ultimately die as a result of heart failure.

Conenose bug adults and nymphs bite their victims at night. During the day, the bugs hide in cracks of poorly constructed homes and in the thatches of grass hut roofs.