The fact that microbes caused more death than hostile fire is well known to the student of the American Civil War. However, much overlooked is the insect role in the transmission of disease-causing organisms. Maladies such as dysentery and malaria have an important or critical insect component and accounted for tremendous suffering during the war. Surrounded by insects such as flies, lice, and fleas, both Union and Confederate soldiers often found themselves battling more than each other. This account reveals the influence of insects on soldiering during the Civil War.

Around 4:30 A.M., a signal cannon fired a shot from Ft. Johnson, SC (1). Moments later, Edmond Ruffin pulled the lanyard on one of the columbiads off Morris Island. His target was a fort in Charleston Harbor--Ft. Sumter. For Ruffin, the Southern firebrand who was adamant about state's rights, the honor of firing on the Federal position was the only recourse left. Civil War historians generally credit Ruffin with firing the first shot of the American Civil War (1861- -1865) but often neglect his other contributions. Prior to the Civil War, Ruffin was the editor of the Farmers' Register. He espoused the then radical idea known as "marling" which was a technique for soil improvement using carbonate lime manure. His writings however, also included a study of the life history and cultural control of the "Corn or fly-weevil" (2) (the Angoumois grain moth, Sitotroga cerealella [Olivier]).

Although the dubious distinction of firing the first shot of the Civil War may have fallen on an entomologist, other folk with entomological interests also were involved in the war. Nearly four years later, one of those entomologists witnessed the surrender of General Robert E. Lee's Army of Northern Virginia. Although all hostilities did not end with Lee's surrender, the Confederate army was shattered as a viable fighting force. F. W. Snow, the noted teacher in entomology, recorded the event at Appomattox in his wartime journal (Mallis 1971). Snow was an avowed pacifist who served in the U.S. Christian Commission and aided the wounded (Mallis 1971). The war that began with a fire-eating entomologist saw its historic end with a pacifistic entomologist.

The Civil War touched the lives of many Americans, including many associated with the classical era of American entomology. The list of those who served in the military or were influenced by the war reads like a Who's Who of early entomology. The war even affected the language of entomologists who did not serve. In Asa Fitch's field observations of the Hessian fly (Mayetiola destructor [Say]) on 23 June 1862, he described collecting the adult midges. Using "a slang term which has recently become current in our country," he noted that the adult midge "skedaddles" when it is approached with a vial (Fitch 1865). Fitch's June entries predated the Seven Days near Richmond and the resulting Union withdrawal. The common soldier's term for military retreat--skedaddle--had found its way into the entomological literature. 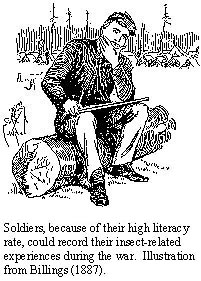 The wealth of information available to the student of the Civil War, one of the best documented wars in human history, exists for a number reasons. For the first time, the American population had a high degree of literacy. This was significant because more soldiers could record their thoughts and experiences of the war. Some participants were eloquent writers, whereas others barely were literate. Examples of such writings are included verbatim in this article. Information concerning daily life, regimental strengths, and troop movements was described and mailed without restriction, because soldiers' letters were not censored during the Civil War. Soldiers and their families, sensing the historical importance of the war, preserved many of those personal accounts and reminiscences. In addition, the Civil War was the first war that was photographed extensively. This photographic legacy provides a wonderful glimpse of the activities of soldiers and their lives. Other illustrative sources include the various sketches and drawings made by soldiers and reporters. Some of the insect-related illustrations are included in John Billings' (1887) excellent narrative, Hardtack and Coffee.

Whole treatises are devoted to a single day of a particular Civil War campaign; others are devoted to tactics, accouterments, soldier life, medicine, regimental histories, ghosts, and even sex. But none is devoted entirely to the role of insects in the Civil War, despite the effects of insects on nearly every aspect of a war said to define us as Americans. The influence of insects and disease on the Napoleonic Campaigns and military history has been discussed recently by Peterson (1995). Like Peterson's study, the present work represents an investigation into the influence of insects during wartime conditions. My purpose is to illuminate not only the relationships between insects and disease but also to include the many aspects that involved insects and soldiering during the Civil War.

Next Section: Flies by the Scores