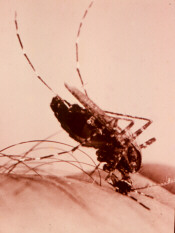 An infection of the human lymphatic system by filarial nematodes (round worms) vectored by mosquitoes. Classified into two groups, Bancroftian (Wuchereria bancrofti) and Malayan (Brugia malayi and B. timori), these three filarial parasites affect over 120 million people in 73 endemic countries world-wide located primarily throughout tropical and subtropical regions of South America, Asia, the Pacific Islands and Africa. Although designated by the World Health Organization (WHO) as the world’s second leading cause of permanent and long-term disability, this mosquito-borne disease is "potentially eradicable" through drug therapy and vector control.

Humans serve as the reservoir for this disease. Mosquitoes taking a blood meal ingest microfilaria (larval stage) which are present in the blood. In the mosquito, ingested microfilaria penetrate the stomach wall, develop in the thoracic muscles and eventually migrate to the proboscis. The mosquito becomes infective about 12-14 days following a blood meal. When the mosquito feeds again, the larvae emerge and enter the skin through the bite, traveling to the lymphatic system where development to the adult stage (macrofilaria) takes place over a period of 3-15 months. Once reaching sexual maturity, adult nematodes produce microfilaria which migrate to the blood.

Filarial nematode activity in humans may result in the following symptoms: acute fever, lymphadenitis, hydrocele (enlargement of the scrotum), elephantiasis of the limbs and breasts, and a bronchial-asthmatic condition known as tropical pulmonary eosinophilia. Although often debilitating, filariasis is rarely fatal. However, secondary bacterial infection of the skin is often characteristic of elephantiasis and may result in death if not treated.

There are many mosquito species which act as vectors for the three different species of filarial nematodes. For example, 9 species of Anopheles vector filariasis in tropical Africa alone. Specifically, the most important vectors of W. bancrofti are Culex quinquefasciatus, Anopheles gambiae, An.funestus, Aedes polynesiensis, Ae. scapularis and Ae. pseudoscutellaris. B. malayi is vectored by An. barbirostris, An. sinensis, An. donaldi and several species of Aedes and Mansonia. Finally, B.timori is transmitted by An. barbiostris.