Distribution: Worldwide in tropics and subtropics

Malaria is caused by protozoal parasites of the genus Plasmodium and is spread only by anopheline mosquitoes. Worldwide approximately 300 million people are affected by malaria and 1-1.5 million deaths annually are attributed to the disease. Symptoms of the disease may occur in 6-8 days or as late as several months after a mosquito bite. These symptoms may include regularly occurring fevers accompanied with chills, hypothermia, and perspiration. Infection results in the enlargement of the spleen and liver. In fatal cases, capillaries in the brain and pia are congested or blocked. The most severe form of malaria, caused by Plasmodium falciparum, is often fatal. 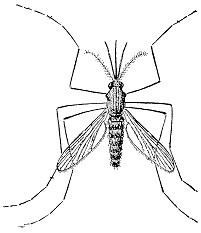 The Anopheles mosquito. Species in this genus vector malaria. USDA

Malaria probably originated in Africa. Although its manifestations have been noted since the earliest of written word, proof of malaria transmission through the mosquito was only established at the turn of the last century. Hippocrates described the disease in the 4th century B.C. The association of the disease with stagnate water (breeding habitats of anopheline mosquitoes) prompted the Romans to initiate drainage programs. The word "malaria" ("mal" meaning bad and "-aria" meaning air) is in reference to the myasmas produced from stagnate waters. Folk of earlier times wrongly associated these gasses with malaria. The disease was probably brought to the New World during the early trans-oceanic voyages of European traders. In the early 1600's, the bark of the cinchona tree in Peru was discovered to provide a cure for malaria. Malaria existed in the United States from colonial times until the 1940's. During the Civil War there 1.3 million cases and 10,000 deaths from malaria in the Union army. As recently as the 1930's, there were 6-7 million annual cases of malaria in the continental United States.