The Napoleonic Campaigns and Historical Perception

This article is reprinted and adapted from Peterson, R. K. D. 1995. Insects,disease, and military history: the Napoleonic campaigns and historical perception. American Entomologist. 41:147-160.

The article is copyrighted by the Entomological Society of America and is reprinted with permission. Other reproduction of this material is prohibited. 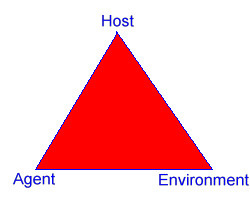 The traditional model of factors causing epidemics has been depicted as a triangle consisting of host, environment, and agent (Fig. 1). This model is important because it illustrates that each factor is connected to the other factors and a change in the properties or expression of one factor will influence the others, altering the frequency of the disease. The epidemiological triangle is not the best model to use for this discussion because it separates the agent from the environment too rigidly. When addressing the relationship of disease and war, we need to discuss a biological environment, a physical environment, and a social environment. Therefore, a more encompassing model is necessary. The wheel of causation is such a model (Mausner & Bahn 1974). Although it is not used as often as the epidemiological triangle model, it has several appealing attributes (Fig. 2). For instance, the wheel contains a hub with the host at its center. For our use, humans represent the host. Also, surrounding the host is the total environment divided into the biological, physical, and social environments. These divisions, of course, are not true divisions--there are considerable interactions among the environment types. Although it is a general model, the wheel of causation does illustrate the multiple etiological factors of human infectious diseases. 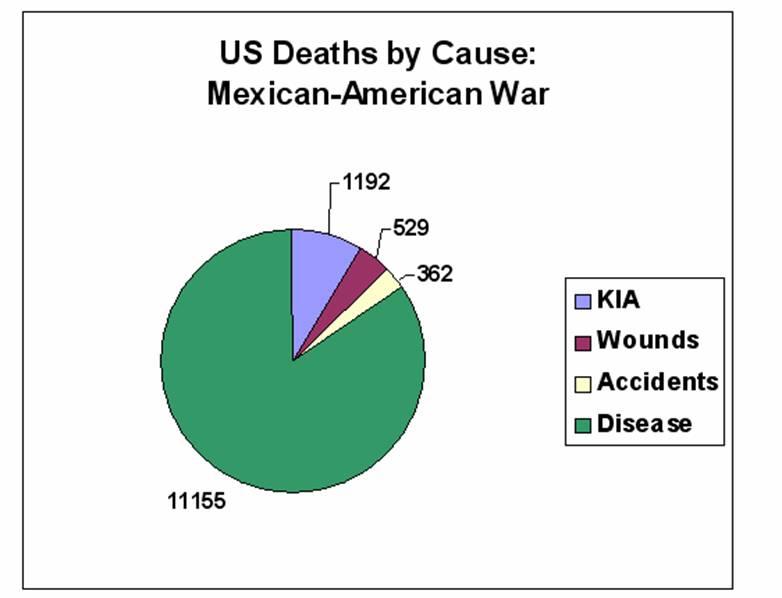 War and disease truly are deadly comrades. Their relationship is a fascinating one. How does war affect epidemics? And how does an epidemic influence war? Regardless of the century, war often leads to a concentration of peoples, the intermixing of populations, and the diversion of resources. These conditions may lead to a decrease in hygiene and medical care and an increase in malnutrition and famine. These in turn may lead to social disintegration (Fig. 3). All of these factors (termed enabling factors by epidemiologists) may produce many stressed individuals who then are more suceptible to disease. And, of course, conditions during wartime can aggravate an established disease, causing it to become quite severe. Before World War I, malaria and typhus occurred in Europe, albeit at low levels. However, the wretched conditions of war caused these two diseases to erupt into epidemics. Similarly, two million Greeks contracted malaria after German occupation during World War II, despite relatively malaria-free conditions before the war (Zinsser 1934).

Conversely, there are several ways in which epidemics can affect, and have affected, events during wartime. For example, an invading army can introduce disease to a defending army and the surrounding communities or populations. In 1741, the Austrian army surrendered Prague to the French army because 30,000 soldiers died of typhus and the Austrians could not defend the city (Zinsser 1934). Another striking example of an invading army introducing disease occurred during the exploration of the New World by Spanish conquistadors. The Incas and Aztecs were destroyed not by swords and muskets, but by smallpox and measles (McNeill 1976).
Invading forces have also been the recipients of strange foreign diseases. These diseases usually have had a greater effect on invading forces than on defending forces or indigenous populations. Bubonic plague ravaged the Crusaders as they left Europe and traversed the Middle East. In 1190, plague and famine reduced a Christian army from 100,000 to 5,000 soldiers (Zinsser 1934). In 1566, Maximillian II of Germany led 80,000 soldiers to attack the Sultan Soliman in Hungary. Before any battlefield action occurred, a devastating typhus epidemic broke out in camp, and the campaign against the Turks had to be called off (Zinsser 1934).

Returning armies often have unknowingly introduced diseases into their homelands. These diseases have led to reduced morale and productivity among citizens. Often, panic of the unknown scourge would cause mass refugee movements, further spreading the disease. The Plague of Athens (ca. 429 B.C.), during the Peloponnesian War, started in Ethiopia, and traveled to Athens by ship. In Athens, it caused tremendous mortality because the citizens were crowded inside the walls of the city. Pericles sent a fleet to capture Potidaea, a Spartan stronghold. Plague broke out on the ship and the navy was forced to return. Although historians are uncertain what type of plague struck Athens (it may have been scarlet fever, bubonic plague, typhus, or smallpox), the epidemic certainly was a key factor in the downfall of the Athenian state (Cartwright 1972). In the devastation of eastern Europe following World War I, as armies were returning home, a typhus epidemic raged between 1917 and 1923. There were at least 30 million cases, and 3 million deaths in European Russia alone (Zinsser 1934).

Disease can also sap the strength of fighting units and reduce morale, resulting in ineffective fighting. During the Seven Years' War, 133,700 men in the Royal Navy were lost to disease and desertion, but only 1,512 were killed in battle (Pope 1981). In 1809, during the Walcheren Expedition, 10,000 of 15,000 British troops had malaria, and many units were completely incapacitated (Bond 1979). In Macedonia, during World War I, a French general, ordered to attack, replied that this was impossible because his army was in the hospital with malaria (Williams 1969). During the Vietnam War, several U.S. fighting units were incapacitated by malaria.

To see how disease has altered the course of military history, I examined insect-borne disease in three Napoleonic campaigns. There are four reasons reasons why the nineteenth century, particularly, illustrates the deadly partnership between war and disease. First, this was the first century with standing national armies. Extremely large numbers of soldiers were at arms--a "nation at arms" as Lazare Carnot, the French Minister of War, called it. Second, war affected entire nations, even entire continents, resulting in mass movements of people across large expanses of land. Third, this period produced recorded histories that are fairly reliable and accurate. Finally, this was the century immediately preceding the great medical discoveries that would forever alter the influence of disease on war and society. In the Napoleonic era, the biological basis of disease transmission was unknown. The idea that microbes caused disease, and insects carried those microbes, would not be known for several more decades. Therefore, although the French army doctors and hospitals were the most advanced in the world during that time, the medical officers blamed the diseases they encountered on changes in the weather or on miasmatic or noxious vapors that emanated from the earth. Consequently, they were nearly powerless to prevent or treat infectious diseases.

Next Section: Plague and the Syrian Campaign