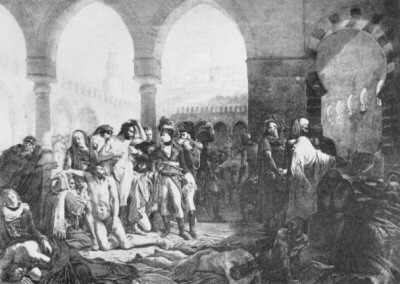 Reservoir: Field rodents and their fleas

Distribution: Scattered throughout the world

Bubonic plague is among the more virulent infectious diseases. Its association with humans is an ancient one. The disease is caused by a bacterium, Yersinia pestis (Lehman & Neumann). The pathogen is transmitted by fleas, particularly the oriental rat flea, Xenopsylla cheopis (Rothschild), but it also can be transmitted from human to human in its pneumonic form (a lung infection). 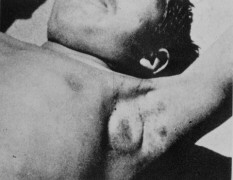 Plague primarily is a disease of rodents. Under certain circumstances, however, plague can be introduced to humans, where it is devastating. Fleas that have fed on plague-infected rats or other rodent species become infected. Plague bacilli multiply in the gut of the flea, and, if humans are in close association with infected rats, the fleas may attempt to feed on them. During feeding, the plague bacilli are introduced into the victim. In humans, after the bacteria are introduced, the onset of the disease usually occurs in three to four days. The disease is characterized by a rapid rise in temperature to approximately 41 oC. Headaches and delirium quickly follow. The swelling, or bubo, typically can be observed on the second day. The tender buboes are swellings of the lymph glands. The infection then spreads from the lymph nodes to the blood stream, and then to the liver and spleen. A secondary pneumonia may develop because of the deposit of bacteria in the lung tissues. A patient may die in less than 24 hours.