Typhus has always been associated with war. Indeed, one of its many colloquial names is war fever. Zinsser (1934) stated, "Typhus had come to be the inevitable and expected companion of war and revolution; no encampment, no campaigning army, and no besieged city escaped it." Rickettsia prowazekii (da Rocha-Lima), a bacterialike organism, causes the dreadful disease. The human body louse, Pediculus humanus L., has been a scourge to humans for centuries. It transmits typhus to humans and humans return the "favor" by infecting the louse, which is also a victim of the disease, seldom surviving its attack. Typhus truly is a disease of humans and lice; no animal reservoirs are known to be involved in the disease cycle.

A louse becomes infected with typhus by taking a blood meal from a fever-ridden human. Once in the louse's gut, the rickettsiae reproduce to such enormous numbers that they cause cells in the insect's gut to rupture. The rickettsiae then are present in the feces of the louse. Humans become infected by rubbing or scratching the lice feces into their skin or into their mucous membranes. It is an interesting disease because even though lice imbibe human blood, the parasite is not transmitted to humans during this process. Most of the other diseases carried by insects are transmitted through the bite. 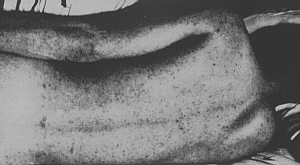 The conditions of war are perfect for typhus to explode into a raging epidemic because poverty, crowding, mass migrations, inadequate housing, and malnutrition encourage its spread. The Plague of Athens in 420 B.C., during the Peloponnesian War, may have been the first recorded typhus epidemic. Typhus' association with war and its devastating effect continued until World War II. A potentially horrific epidemic was averted in Sicily and Italy in 1943 through a concerted delousing campaign engineered by the Allies using the then miraculous compound, DDT.