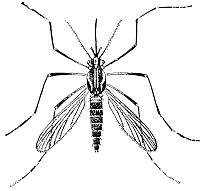 The yellowfever mosquito, Aedes aegypti. The species is the primary vector of yellow fever.

Yellow fever is caused by a virus and is spread by the yellowfever mosquito, Aedes aegypti (L.). The disease, which originated in Africa and spread to the New World during the slave trade in the 1500s, affects humans as well as monkeys. Typically, yellow fever is expressed within one week of infection. Mild symptoms include headaches, fever, muscular pains, and nausea. Severe symptoms include dangerously high fevers, severe headaches, muscular pains, jaundice, and vomiting (characterized by black material and fluid). Yellow fever can lead to delirium, coma, and death.

Yellow fever and the yellowfever mosquito are thought to have originated in Africa. It was brought to the New World on slave ships in the 1500s. Yellow fever ravaged Europeans in the New World. Buckley (1985) stated, "The West Indies was, quite simply, a deathtrap for whites without immunity to yellow fever." The British were repeatedly stung by the disease in the Caribbean and South America. In 1741, during an expedition to capture Peru and Mexico, British forces were reduced from 27,000 to 7,000 by the dreaded disease they called "black vomit." Coastal towns and hamlets in the United States were particularly vulnerable to the disease in the seventeenth and eighteenth centuries. Even as late as 1878, a yellow fever epidemic struck more than 100 United States towns, killing at least 20,000 people.