Justinian’s Foreign Policy and the Plague: Did Justinian Create the First Pandemic?

Emperor Justinian I took power of a depleted Roman Empire in 527 C.E. Justinian’s goal was to restore the Roman Empire to her early glory, and rebuild the trade routes. The process of rebuilding the empire meant the formation and movement of vast armies, establishment of supply trains for the armies, and lots of funding. Justinian imposed heavy taxes on his citizens and re-conquered lands to help pay for his wars. Accounts of the wars given by Procopius (1914) suggest Justinian was making good progress in his attempts to restore the empire until 541 C.E. when plague broke out in the empire.

Descriptions of what appears to have been bubonic plague have survived from throughout ancient Roman history. Those reports were centered in the Levant (north of the Red Sea) and northern Africa, and described very high rates of mortality (Orent 2004). At this time, plague occurrences remained isolated epidemics never spreading across vast areas to become pandemics until the plague of 541-2 C.E.

Based on the accounts of Procopius, a historian in the mid sixth century, the plague appears to have begun around the port of Pelusium in 541. From Pelusium it spread in two directions: to Alexandria and throughout Egypt, as well as east into Palestine and from there across the known world (Procopius 1914). The plague reached Constantinople in 542, and ran its course in four months with the period of peak virulence lasting three months (Procopius 1914). From Constantinople the plague moved east into Asia Minor, and west through Greece, into Italy, France and Spain, and north into the British Isles (Figure 1) (Keys 1999). DNA from the plague bacterium, Yersinia pestis, has been isolated from a sixth century grave in Bavaria as well, indicating that the plague spread northward as well as westward from Constantinople (Wiechmann and Grupe 2005).

From the contemporary descriptions of the Plague that have survived, it clear that the first pandemic primarily consisted of the bubonic and septicemic forms of the disease (Orent 2004, Procopius 1914). The accounts describe the plague as starting in port towns and moving inland from there, and they remark that being around the sick and touching the dead did not make a healthy person sick. Although it is difficult to estimate the percentage of the population that died as a result of the Plague, Procopius (1935) reports that in Constantinople 5000 – 10,000 people died each day at the height of the disease.

Procopius, who did not like Justinian, suggested in his Secret History that Justinian created the plague and brought “about calamities affecting the whole world… not by human strength, but by another kind” (Procopius 1935). Procopius’ point of view made sense in the context of the times. By the 500’s, emperors were no longer considered divine figures themselves; they were believed to be governing under the direct authority of God, and were considered temporal partners to God (Evan 1996). Therefore, it would not be unreasonable for Procopius to believe Justinian was acting as a temporal partner of a darker power than God.

Orent (2004) presents the thesis that although Justinian did not create the disease, he may have created the pandemic. She writes

Justinian had not created the disease, but he created the pandemic, which followed the movements of men and goods in Justinian’s resurrected empire. Without the empire, the bread dole, the huge shipments of grain and cloth from Africa, it is difficult to imagine how the First Pandemic could ever have erupted.

When Emperor Constantine I died in 337 C.E., his sons split the empire and it began to crumble in a process that continued until Justinian’s ascendancy (Evans 1996). Justinian wanted to restore the empire to glory by taking Italy back from the Ostrogoths and North Africa back from the Vandals. He also needed to protect the eastern borders from the Persians (Orent 2004). To pay for this, Justinian taxed his people and demanded tributes from the lands he reclaimed, including grain from North Africa. The grain tribute from Africa was approximately 240 metric tons per year (Evans 1996) and primarily went to Constantinople where it was used in a bread dole to feed the people of the city. The grain was brought to Constantinople by ship across the Mediterranean Sea. Bad weather and heavy seas closed the Mediterranean Sea to shipping from November to March, and it was still dangerous an additional two months on either side of the closed period (Temin 2001). With only four “safe” months out of a year in which grain could be shipped, horrea (warehouses) were built to store the grain. The early horrea of Ostia and Rome were 60 foot by 100 foot one story buildings (Vitelli 1980), but in Constantinople some have been reported as large as 90 feet by 280 feet and “ineffably” tall (Evans 1996). The horrea were ideal breading grounds for rats and fleas, and Orent (2004) claims that the combination of these plague factories and expanded trade routes were the catalyst for the plague going from epidemic to pandemic.

Although renewed trade, war, and presence of horrea in Constantinople and other major port cities such as Alexandria undoubtedly played a role in the First Pandemic, none of those factors is unique to Justinian’s reign as Emperor. The Roman Empire has a long history of conquest, reconquest, grain tributes, and grain storage. Historians have found evidence that as early as the fourth millennium B.C.E. Mesopotamian grain producers were compelled to provide a portion of their surplus grain for “socially defined ends” (Vitelli 1980). This suggests both the existence of in-kind grain taxes as well as some sort of social welfare system. There is also evidence of a grain dole in Rome as early as 53 B.C.E., and historians believe that as many as 320,000 citizens in the city of Rome benefited from state provided grain in 46 B.C.E. (Vitelli 1980). As the city of Rome grew, the ability of the local population to produce enough grain to feed the city declined. During Rome’s peak prosperity, as much as two thirds of the grain needed to feed the city was imported from elsewhere (Vitelli 1980). Due to the difficulty in navigating to Rome by ship, grain was stored in Ostia in horrea that were clustered along the main roads and along the Tiber River. As weather permitted, the grain was then moved from Ostia to warehouses in Rome’s commercial areas near Ponte Testaccio (Vitelli 1980).

If grain storage necessitated by the short shipping period and the bread dole alone were the catalysts for the Justinian Plague, I would expect conditions would have been ripe for a pandemic earlier in Roman history. The amount of grain shipped and stored may have declined after the Vandals crossed the Strait of Gibralter in 427 C.E. and began the reconquest of Africa (Scaruffi 1999) and the extent of trade routes most likely declined as the size of the Empire diminished. Justinian did not come to power during a long period of peace. Constantine’s three sons were involved in a series of wars to protect their portions of the empire. All the conditions cited by Orent (2004) when she suggests Justinian created the pandemic were not new or necessarily created by Justinian.

The fact that there was not an earlier pandemic suggests that there were other factors that accompanied the renewed trade and wars, and possibly the increase in the amount of grain stored that created the pandemic. Plague is primarily an enzootic disease in sylvatic rodents (Gage and Kosoy 2004). For plague to move from rodents to cause an epidemic or pandemic, the wild rodents need to come into contact with urban rodents or people themselves. The general health of a population can affect their susceptibility to disease, and the climate could affect the likelihood of plague jumping from animal reservoirs to humans.

There seems to be some disagreement about the conditions in the Roman Empire leading up to the plague. (Russell 1968) stated that the empire was prosperous, the population was increasing, and that “there seems to be no evidence of poor conditions just before the plague in the heart of the empire”. Procopius, on the other hand, wrote at great length about the financial burden the many wars and the “extravagant” building programs put on the backs of the people through taxes. By Procopius’ account, the citizens of Constantinople could barely afford to feed themselves (Procopius 1914). 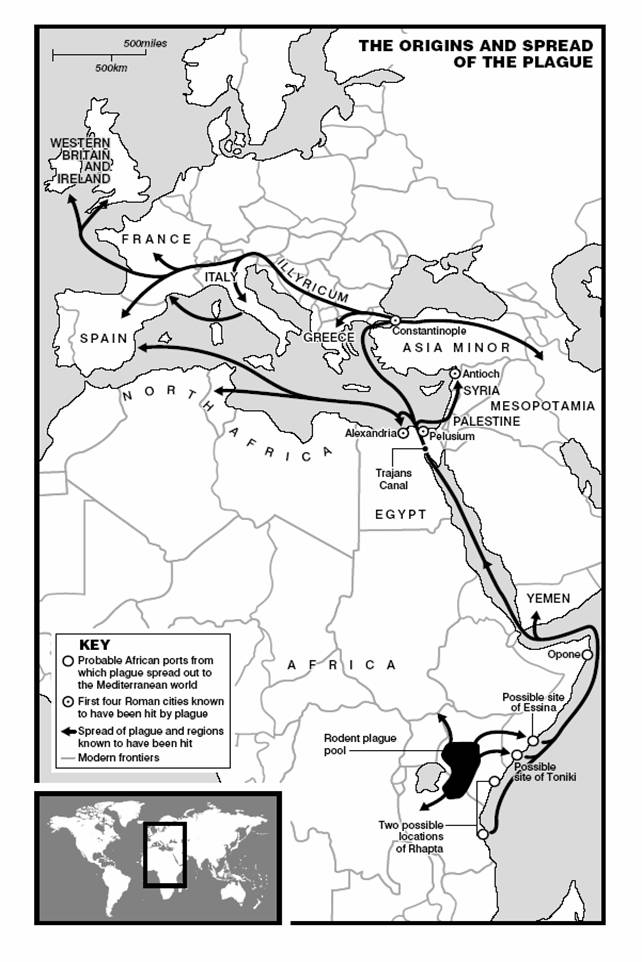 Figure 1. Possible origin and spread of the first plague pandemic. From (Keys 1999)

Around the middle of the sixth century there was a dramatic climate shift; John of Ephesus, another sixth century historian, described it, “the sun became dark and its darkness lasted for 18 months. Each day, it shone for about four hours, and still this light was only a feeble shadow” (Keys 1999). Procopius also described the incident which took place in 535 and 536 C.E., writing “the sun gave forth its light without brightness like the moon during the whole year” (Keys 1999). Tree ring analysis shows an extended period of cold indicated by extremely narrow growth rings between 536 and 545. The narrow growth rings correspond to a decreased growth rate that would be expected with a global temperature decrease of approximately 3 °C (Rigby et al 2004). This mini nuclear winter is believed to have been caused by a comet hitting the earth (Rigby et al 2004) or the eruption of a massive volcano, possibly Krakatoa (Keys 1999). This cold period was accompanied by wetter than usual weather in several parts of Eurasia and was followed by drought (Keys 1999). This disruption of weather could have weakened the population through crop failures and famine, and made the people more susceptible to plague.

This weather pattern also could have brought wild rodents harboring plague into close contact with rodents associated with human habitation, and thus provided a link to people. Fleas require warm (18-27 °C) moist (greater than 70% humidity) conditions to develop (Harwood and James 1979). The cold temperatures and crop failures of the sixth century would retard flea reproduction outdoors, but also could have driven rats and fleas inside homes and horrea, to warmer temperatures and food sources. The plague is believed to have started in the area around Ethiopia, near a known plague reservoir in an area that is normally fairly dry (Figure 1) (Keys 1999). The increased rain and flooding might also have driven wild rodents from their burrows in or near river banks into close contact with human dwellings and house rodents (Keys 1999).

Wars, grain storage, and bread dole were not unique to Justinian’s reign, and therefore were not likely to be the reason a plague pandemic occurred while he was in power. The dramatic shift in climate from 535 – 540, a factor completely out of Justinian’s control, is more likely to have set the stage for the plague to jump from animal reservoirs to humans. Justinian’s horrea,trade routes, and supply lines most likely influenced the extent of the pandemic even if they did not cause the pandemic.