The global average annual temperature in the 20th century has increased nearly 1 degree C and is predicted to rise for decades (IPCC 2007). The effects of this change (i.e., temperature, moisture) are manifested differently across our planet owing to differential temperature change and ecosystem sensitivity. Consistent with the projections of climate models, polar regions are warming faster than the rest of the earth (Chapin et al. 2005). In the north, the Arctic has warmed twice as fast as other regions, resulting in melting sea ice and glaciers, shrinking habitat for humans and other organisms and feedbacks that increase greenhouse gases and affect climate (IPCC 2007; Chapin et al. 2005). On the Antarctic continent, warming is also occurring faster than expected in certain areas: the Antarctic peninsula has warmed five times faster than the global average (2.5 degrees C since 1945), and the warming of the southern ocean and associated loss of sea ice has resulted in a shift in penguin species and their food sources (Montes-Hugo et al. 2009; McClintock et al 2008). In contrast to the changes in the Antarctic Peninsula, temperatures in the vast interior of the Antarctic continent have remained stable or cooled owing to the presence of a high Southern Annular Mode (SAM Index) thought to be caused in part by stratospheric ozone depletion (Thompson and Solomon 2002). As the ozone hole diminishes, temperatures have been predicted to increase gradually throughout the continental interior and in the McMurdo Dry Valleys (MDV) (Walsh 2009; Chapman and Walsh 2007). The NSF currently has two LTERs in Antarctica that are investigating the effects of climate change on ecosystem structure and function: The PAL is studying rapid warming on marine systems whereas the MCM LTER has been focusing on ecosystem responses to cooling, and now in this proposal, the connectivity of terrestrialfreshwater systems caused by presses and pulses of warming. Like the PAL system, the transition to warmer, wetter conditionsin the MDV will likely have profound effects on biodiversity and biogeochemical cycling, and may leave this ecosystem more vulnerable to other drivers of environmental change,such as invasive species.

Ecosystem responsesto climate trends have received much attention, particularly in arid environments (e.g., Clark et al. 2009; Peters et al. 2004; 2008; Okin et al. 2009). Ecosystem processes in arid environments are often influenced by discrete climate events, traditionally described as pulses (Gebauer and Ehleringer 2000; Schwinning et al. 2003; 2004). Discrete climate events can be extreme in terms of
magnitude (e.g., intense precipitation or ice melt events), but may not have negative impacts on the ecosystem. In fact, such temporal climate variability is a characteristic property that contributesto both the structure (i.e., community composition) and functioning (e.g., biogeochemistry and production) of desert ecosystems (e.g., Reynolds et al. 2004). Discrete climate events can have a disproportional
influence over ecosystems relative to the temporal scales over which they occur (Pennington and Collins 2007). These effects can vary spatially over time and can influence ecosystem heterogeneity at many scales (Schimel et al. 2007; Clark et al. 2009). This sensitivity to discrete climate events is particularly true for polar deserts (Robinson et al. 1998; Convey et al. 2003) because massive water reserves are
present as ice in alpine and terminal glaciers, as seen in the satellite image of the MDV (Fig 2). For example, pulses of liquid water following melt have been observed to rapidly reactivate soil and stream biota (Barrett et al. 2002b; Treonis and Wall 2005; McKnight et al. 2007), and increase nutrient loading and primary productivity in adjacent lake ecosystems (Foreman et al. 2004; Doran et al. 2008; 2009).

Lake Miers and the Miers Valley. (photo by A. Chiuchiolo)

Evolution of the MCM Conceptual Model

Our overarching hypothesis in MCM1 was: The structure and function of the MCM was controlled by physical constraints. Habitat suitability, defined by the presence and composition of biota, was determined primarily by physical factors (Freckman and Virginia 1997) and much of the organic material supporting these soil communities was produced in paleolakes that filled some of the valleys >10k years ago under a different climate regime (Burkins et al. 2000). Similarly, we found that the nutrient status and distribution of phytoplankton in the lakes reflect differences in long-term accumulation of solutes determined by landscape position and past climates (Priscu 1995; Lyons et al. 2000). The discovery of linkages between past dry valley climate and contemporary ecosystem functioning led to the central hypothesis of MCM2: Past climates in polar desert environments strongly overprint present ecosystem structure and function. In MCM2, ecological legacies (e.g., salts, organic matter) were found to also influence biodiversity. For example, many of the phototrophic microbes in soils and streams reflect the legacy of benthic mat communities deposited by paleolakes, whereas other species have more contemporary origins (Brambilla et al. 2001; Nadeau and Castenholz 2001; Wood et al. 2008). This led to the central hypothesis for MCM3: Biodiversity and ecosystem structure and function in the McMurdo Dry Valleys are dictated by the interactions of climatic legacies with contemporary biotic and physical processes. Using molecular tools, we showed that the diversity of phyto- and bacterioplankton in the lakes is structured by ancient nutrient pools (Glatz et al. 2006; Priscu et al. 2008) and nematode diversity is related to desiccation survival (Adhikari et al. 2009). 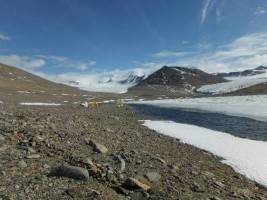 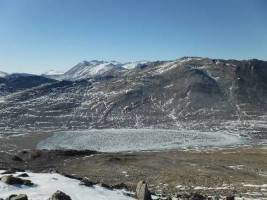 MCM4 will incorporate our conceptual advances on interactions of ecological legacies and climate (at decadal to millennial time scales) with a new set of hypotheses to examine how the MDV will respond to the latest predictions for climate in this region of Antarctica. The MDV is an environment poised for dramatic change. New large-scale climate models (Walsh 2009; Chapman and Walsh 2007) indicating a
continent wide warming trend over the next 50 to 100 years, in concert with our current understanding of contemporary MDV function in relation to past climate legacies, lead us to our current overarching hypothesis for this MCM4 proposal: Climate warming in the McMurdo Dry Valley ecosystem will amplify connectivity among landscape units leading to enhanced coupling of nutrient cycles across landscapes, and increased biodiversity and productivity within the ecosystem.

Floods produced by warming events and katabatic windstorms of increased magnitude and/or frequency will accelerate movement of biota and nutrients across the dry valley landscape. Large pulses in melt water should enhance connectivity by increasing habitat suitability for microalgae and invertebrates and effectively expanding the range of many taxa. Movement of specific organisms with water and wind-blown material should resemble source pools within a given valley because the valleys are aligned with prevailing winds.

If dry valley invertebrate and bacterial communities respond in opposite ways to saturation, then the most complex communities (i.e., those characterized by moderate levels of bacterial, cyanobacterial and invertebrate diversity) may occur in the ecotones between saturated sediments and arid soil environments. If warm climates enhance hydrologic connectivity by expanding the saturated zones, these ecotones between wet sediment and dry soil environments may also be expanded, thus contributing to more biological complexity within the dry valley landscape.

H3. Increased connectivity enhances rate, variance and the coupling of biogeochemical processes across the landscape.

In streams, high flows may cause scouring of cyanobacterial mats from the streambed and contribute to high organic matter and nutrient loading to lakes. In soils, high melt years are associated with changes in soil communities and the mobilization of salts. Increased snow patch and permafrost melting during warm years would also increase solute and nutrient fluxes into the stream and lakes and ï¿½desaltï¿½ the soils.

The elevational and longitudinal gradients characterizing the local physical geography will constrain development of newly or intermittently wetted habitats resulting from increased frequency of summer warming events and increased hydrological connectivity. Habitat suitability varies greatly along both gradients in both soils and streams. With warmer summer conditions, some currently closed basin lakes may become flow through lakes like Lake Miers. This change would be expected to influence the connectivity of the lake microbial communities.

Read more about MCM IV in our 2010 research proposal