Effective clearance of an infection requires that the immune system rapidly detects and neutralizes invading parasites, while strictly avoiding self-antigens that would result in autoimmunity. The sophisticated cellular machinery and signaling pathways that coordinate an effective immune response have generally been considered to be properties of the eukaryotic immune system. However, a surprisingly sophisticated adaptive immune system that relies on small RNAs for sequence-specific targeting of invading parasites has recently been discovered in bacteria and archaea. Central to this immune system is a diverse family of DNA repeats called CRISPRs (Clustered Regularly Interspaced Short Palindromic Repeats). These repetitive loci serve as molecular vaccination cards that maintain a genetic record of all prior encounters with foreign transgressors (i.e. viruses and plasmids). The acquisition of foreign DNA and sequence-specific interference is mediated by a diverse set of CRISPR-associated (Cas) proteins that are encoded in gene clusters that flank each CRISPR locus. Phylogenetic analyses performed using a universally conserved cas gene (Cas1) have identified several distinct versions of the CRISPR system that each consist of a unique set of 4-10 cas genes. In each of these systems, the CRISPR locus is transcribed and the long primary transcripts are processed into a library of short CRISPR-derived RNAs (crRNAs) that each contains a unique sequence complementary to a foreign nucleic acid challenger. Each crRNA is packaged into a large, multi-subunit surveillance complex that patrols the intracellular environment and ‘silences’ invading foreign nucleic acid targets 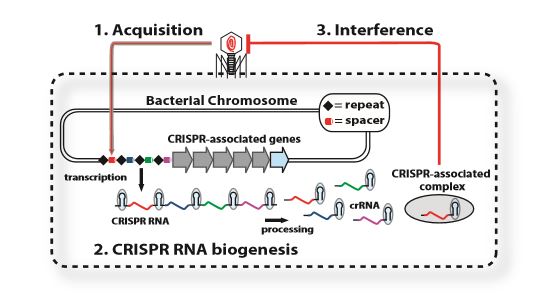 The general steps required for adaptive immunity in bacteria and archaea have been identified, however, the mechanisms of foreign nucleic acid recognition, new sequence acquisition, and RNA-guided interference are not understood. The Wiedenheft laboratory uses molecular biology to engineer model microbes for functional and structural interrogation of the molecular machines that coordinate an effective immune response. Work in our lab focuses broadly on the three areas below.

We aim to understand the mechanisms that bacteria use to defend themselves from phage infection and counter mechanisms that phages use to subvert bacterial immune systems. Much of the lab focuses on CRISPR systems but we are also interested in other immune pathways.

The development of one CRISPR system protein, Cas9, into a genome editing tool has opened a floodgate of genomic research in a wide variety of organisms. Targeting of Cas9 to a specific genetic locus via a 20-nt guide RNA sequence results in a double strand break in the genomic DNA. Cellular repair machinery can lead to imprecise repair via the non-homologous end-joining pathway (leading to knock-out of the targeted gene) or to precise modifications of the researcher's choice when a donor DNA molecule is supplied (homology-directed repair). The Wiedenheft lab is interested in improving the efficiency of the homology-directed repair process for designed modifications but has also collaborated with other researchers to implement Cas9 knock-out in human cells and organoids, and organisms from insects to birds.

We are interested in understanding the co-evolution between hosts and their parasites. Current research focuses on infections by Chlamydia, Ebola, Salmonella, and Helicobacter