Jennifer Cooper has performed in England, Ireland, Austria, Brazil, Canada, and throughout the United States.  She is founding member and flutist of Awea Duo, has performed with multiple Canadian and American Orchestras, and is a prizewinner of several international flute competitions.  She served as professor of flute at Morehead State University, KY, Lutheran Summer Music, IA, and at the Kentucky Institute for International Studies in Salzburg, Austria.  She holds degrees from Wilfrid Laurier University, Ontario, Royal Northern College of Music, UK, and the Cincinnati College-Conservatory of Music, OH.  Cooper is a Powell Flutes Performing Artist.  For more info visit: www.jcooperflute.com

Jan Halmes has been a dedicated accompanist since the age of 12, when she began to discover the possibilities of subtle collaboration in ensemble playing. Since then she has teamed with many singers, instrumentalists and choral groups, touring and performing. Jan studied piano performance at the University of Montana with Lucien Hut. Further exploration let Jan to intensive study in German Art Song with masters including: Hans Hotter, Elly Ameling, Otto Edelmann and Walter Berry. 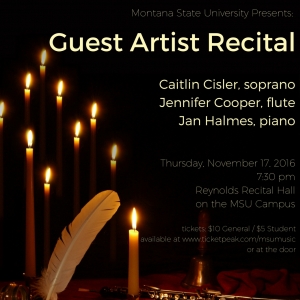