When? April 22nd, 2017. Rally, with guest speakers, at 10:00a.m. March to follow around 11:00. Our guest speakers include: President Waded Cruzado, Vice President of Research and Economic Development, Dr. Renee Reijo Pera, the president of the Entomological Society of America, Dr. Robert Peterson will address science in a post-fact world and the director of the Institute on Ecosystems, Dr. Cathy Whitlock, will speak on climate change.

Where? On the Centennial Mall, in front of Montana Hall - MSU, Bozeman campus. March down 8th Street to the Gallatin County Courthouse.

What? The March for Science is the first step of a global movement to defend the vital role science plays in our health, safety, economies, and governments.

Why? Science, scientists, and evidence-based policymaking are the focus. Budget cuts, censorship of researchers, disappearing datasets, and threats to dismantle government agencies harm us all, putting our health, food, air, water, climate, and jobs at risk. It is time for people who support science to take a public stand and be counted.

How? We are building a broad, nonpartisan, and diverse coalition of organizations and individuals who stand up for science. We are advocating for evidence-based policymaking, science education, research funding, and inclusive and accessible science.

We have more than 200 partner organizations and counting who have come out in support of this endeavor. Groups such as the American Association for the Advancement of Science and the American Chemical Society. Numerous universities have also come out in support including the University of Montana and the ASMSU senate voted unanimoulsly to approve a resolution endorsing this cause.

We are marching in celebration of science and to inspire unity. We are people who value science: scientists, educators, journalists, students, neighbors, friends, and family. We come from all races, all religions, all gender identities, all sexual orientations, all abilities, all socioeconomic backgrounds, all political perspectives, and all nationalities. Our diversity is our greatest strength: a wealth of opinions, perspectives, and ideas is critical for the scientific process. What unites us is a love of science, and an insatiable curiosity. We all recognize that science is everywhere and affects everyone. 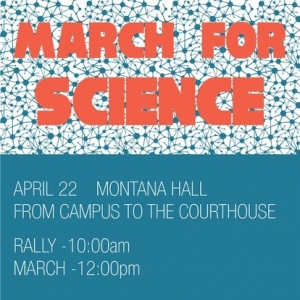