The Helen E. Copeland Gallery and the School of Art at Montana State University is pleased to announce the opening of Fay Peck: American Expressionist on exhibit from Monday, January 8th – Wednesday, January, 24th, 2018.  A public reception will be held on Thursday, January 18th from 6:00 - 8:00 pm, in the Helen E. Copeland Gallery, which is located on the second floor of the School of Art in Haynes Hall. This free event is open to the public. Hors d’oeuvres will be served.

Fay Peck: American Expressionist is an exhibition of works from the prolific career of the late Fay Peck, an internationally shown painter and printmaker who spent the final years of her life with her family in Bozeman.  Showcasing landscapes, portraits, and nudes from the extensive career of this little-known gem, Fay Peck: American Expressionist displays a portfolio through a very strong and empowered feminine lens.

With large-scale landscapes rich in impasto and vibrant hues, Peck’s landscapes have a physicality that encompasses the viewers full visual frame. According to Franz Schulz in Art in America:

“Her technique is unstintingly painterly: bold, impetuously brushed color areas are ungirded by a strong, even willful line.  To see this kind of painting in today’s cool, impersonal art environment is to be impressed by the force of Fay’s commitment and courage in fashioning a vision of her own.”

An excellent juxtaposition to her landscapes, Peck’s nudes are adorned with retro patterns of the 70’s.  Speaking to Second-wave feminism of the time, Peck’s female gaze allows for the nude women to be depicted in their imperfect form with wide thighs and cellulite, yet retain their beauty. These nudes are not demure nor stoic nor stolid, but approachable while still demanding the viewer’s attention and respect.

The portraiture of Peck is equally engaging.  Trusting in her single gesture line, Peck’s people have individual personalities, humble with flaws and imperfections.  Using oil pastel over monotype, her figures are comical and playful, bringing a smile to the viewer’s pate. Of her drawings and prints, Rainer Michael Mason in the Tribune de Genéve stated:

“One feels an authentic personality, full of ardor […] Her drawings, which do not lack fullness, contrast a background of floral tapestry with bodies which make the whiteness of the paper sing.”

Fay Peck was born in 1931 and grew up in River Forest, Illinois, where she acquired a great love of nature.  Peck attended University of Miami, and continued her education at summer programs at the University of Wisconsin and the University of Oslo, Norway.  While keeping her own studio at her home in Illinois, Peck often painted en plein air in private meadows and the outdoors of Snowmass, CO.  She participated in print workshops at the Anderson Ranch in Aspen, CO and at the Evanston Art Center in Evanston, IL where she studied under Paul Wieghardt.  Describing her outdoor practice, Peck stated:

“I drove to locations in my station wagon or my Harvester Scout, which I owned for about 20 years.  I would load the back up with heavy Masonite boards, two palettes with mounds of fresh oil paint, two easels, a folding chair, six TV tray tables, a large basket of oil paints and brushes, and one or two German Shepherds.  It would take about four days on location.”

Peck’s work is included in the collections of Robert B. Meyer, Founder of the Chicago Museum of Art; Rice University; First National Bank of Chicago; the New York Stock Exchange; Goldman Sachs; and various US embassies. She was married to her husband for 45 years and is survived by her four children and ten grandchildren. Peck passed away in 2016, but not before she saw her granddaughter, Carling Peck, graduate at MSU School of Art with a degree in graphic design.

The Helen E. Copeland Gallery is located on the second floor of Haynes Hall. Please note that the parking passes are required for parking during the business day (6AM - 6PM).

For more information on this exhibition, or on the Helen E. Copeland gallery in general, please visit http://hecgallery.com or follow us on Facebook (http://facebook.com/msuhecg). 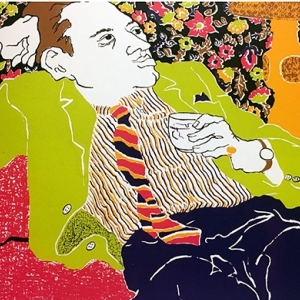