With the advantages of conveying a message in a simple, linear, and easily understandable manner to the largely uneducated masses and children, Chinese animation from the 1950s to early 1980s was “geared as a propaganda tool to serve the new socialist order, promote the construction of a new society,” and educate youthful communist successors. During this period of time, the animation with scientific themes played important roles in popularizing scientific knowledge and new technologies, promoting scientific thinking, and responding to the Party’s rhetoric about achieving the Four Modernizations by the end of the twentieth century. This presentation focuses on Chinese animation with scientific themes made by the Shanghai Animation Film Studio from1957 to 1983 in order to shed light on the important function of Chinese scientific animation as a media tool to contribute to the nation’s political, cultural, and scientific development. 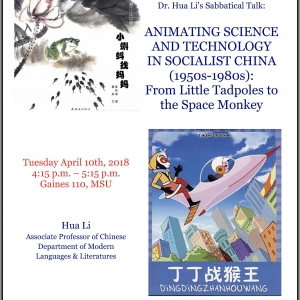