Join DISC at 1:00pm on Thursday, 26 April 2018 for "An Antiquarium for Torre Annunziata" a sure-to-be-fascinating talk from Assistant Professor Bradford Watson (MSU School of Architecture) and graduate students Cara Bionde, Ryley Enich, and Katey Gibbs. Come for the conversation and stay for the complimentary food and drink!

MSU's Data Infrastructure and Scholarly Communication (DISC) group is pleased to pleased to include Bradford Watson, Cara Bionde, Ryley Enich, and Katey Gibbs on the roster of the 2018 DISC Speaker Series. Designed as a venue for for MSU researchers to share their work with non-expert, multidisciplinary audiences, the DISC Speaker Series will feature brief multimedia presentations and include time for questions and conversation. All DISC Speaker Series events will occur at the CyberDiscovery visualization area located on the first floor of MSU Library.

ABSTRACT // The town of Torre Annunziata, located in the Bay of Naples, was once the largest pasta producer in the country but has been in decline since the early part of last century. As tourists started flocking to Pompeii to see the ruins, Torre Annunziata decided that they would excavate some of their sites that were buried in the Vesuvian flow of AD 79. The Villa Oplontis was the primary excavation which started in 1964. The Villa has been reconstructed in many areas and was very fortunate to have not been robbed during the Bourbon dynasty. As a result of the tomb raiders not discovering the collection, the Villa and a second commercial structure (Oplontis B also located in the town) contain many artifacts that remain on site and not in distant museums. There are marble sculptures, coins, fresco fragments, amphora, jewelry and furnishings among others that make up the collection. These artifacts are part of the community and they would like to be able to access them and display them to the public. Right now the majority of these items are on metal shelves in a storage building or left exposed to the elements, causing deterioration.

There has been a significant increase in investment to the archeological sites of the region over that last few years as Pompeii is now the most visited archeological site in the world. The collection from the Oplontis sites is unique and possesses the potential to be a catalyst for the community. The Libera Nike movement is a community effort to create a venue for these artifacts to be displayed. Right now it consists of a desire from the community but no financial support from the city or Italian government. They are in need of clarifying the vision for how this exhibition space could become part of the community and design strategies to help move this project forward. This presentation will provide the context and process of the development of the design tools for Torre Annunziata to envision an antiquarium for their community.

BIO // Bradford Watson received a Bachelor of Architecture from the Pennsylvania State University and a Post-Professional Masters from Cranbrook Academy of Art. He is a licensed architect who spent 12 years in professional practice with an emphasis on cultural and performing arts design and planning prior to joining Montana State University.

Watson has undertaken extensive research on the displaced terrain of Butte, Montana resulting from its history of extraction -- resulting in a new landscape that can be reconsidered as a topography of possible occupation and intervention through new reclamation strategies. His research has been presented at the ACSA International Conference and published in MONU, Scenario, and On Site Review. He has also been awarded a small project grant through the Butte Natural Resource Damage Council to reclaim the former Bonanza Mine Dump as a community asset and economic generator through BMX.

Watson's current research examines the occupation of the Mountain West and the extractive nature of that occupation, both through resource and experiential extraction. This research has been presented at the ACSA, CELA and DCA conferences and published in Ground Up and On Site Review.

Cara Bionde, Ryley Enich and Katey Gibbs are graduate students in the School of Architecture and have been working with Professors Everts and Watson since 2016 on this project. 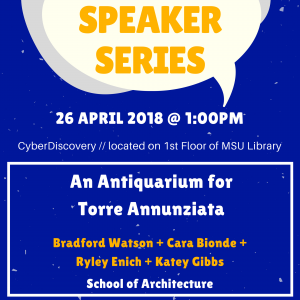