November 11, 2018 marks the 100th anniversary of end of hostilities in World War I, and a series of speakers, historians, and museum curators will be at the Bozeman Public Library to mark this anniversary of the Armistice.

Fighting ceased on the eleventh hour of the eleventh day of the eleventh month of 1918, more than four years after the conflict began.  By 1919 many countries had designated November 11 as Armistice Day, a day to pay homage to the millions killed in the war, to think about the costs of war, and to celebrate peace.  It became a tradition to wear a red poppy of remembrance over one's heart.  In 1954, the U.S. Congress amended the act that made Armistice Day a holiday and changed its name to Veterans Day.

Four speakers will present a variety of local and global experiences of the war and descriptions of the ways in which it has become inscribed in national memories.

In the large community room, starting at 1 pm, Jennifer Lynn, Associate Professor of History & Director of the Women's and Gender Studies Center at MSU-Billings will talk about "Visualizing the Great War: Protest, Trauma, and Memory during the Weimar Republic."  Lynn will explore the work of German artists and activists who attempted to work through the trauma of the fighting front and the home front, as well as those who used art to argue for revolutionary change. She will be followed by Nic Rae, Dean of the College of Letters & Science at MSU-Bozeman and professor of Political Science.  He will discuss "World War I in British Memory," examining the ways in which Britons have come to see the end of the war as marking the beginnings of Britain's decline as a world power.

Kelly Hartman, curator of the Gallatin History Museum will bring the war to the Montana home front, in her talk, "Sedition in Gallatin County," recalling the story of two local men found guilty of Montana's Sedition law and sent to state prison.  Cathy Zabinski, Professor in the Department of Land Resources and Environmental Sciences at MSU-Bozeman and a Sloan Foundation Fellow, will bridge the global and local in "Bread Bullets: Wheat and World War I," examining the ways in which wheat production in North America supported both the Allies and the American economy.

In the small community room between 1 and 4, the Museum of the Rockies and local collectors will have on display artifacts from the Great War and will talk about military aspects of Montanans' enrollment.  The public is encouraged to bring any personal artifacts they might have from their families and either learn more about them or share their stories with us.

This program is part of “Memories and Legacies of World War I: Commemorating the Armistice," co-sponsored by the MSU Center for Western Lands & Peoples and the Gallatin History Museum.  Additional community support provided by the MSU Library, the Bozeman Public Library, MSU Department of History and Philosophy, Bozeman High School, and the Museum of the Rockies.

Refreshments will be served.  Everyone is welcome. 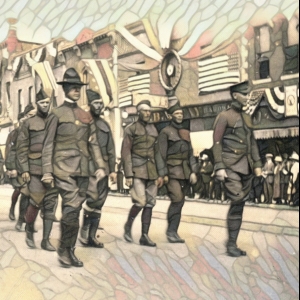