The public will be able to tour Norm Asbjornson Hall during its grand opening on Friday, Dec. 14 with a ribbon-cutting at 10 a.m.

The event will include remarks from Montana State University President Waded Cruzado and others, as well as a celebration featuring MSU's color guard.

Following the roughly one-hour ceremony, the public may tour the new building, which will house MSU's Norm Asbjornson College of Engineering and Honors College.

Norm Asbjornson Hall is one of only 10 buildings in Montana to be certified LEED Platinum, the U.S. Green Building Council's highest certification. The building includes a solar electric system, solar air-heating and a geothermal system used to heat and cool the space.

The building was funded largely by a $50 million donation from Norm Asbjornson, a Winifred native and MSU engineering alumnus. No taxpayer dollars have been used in the construction of the building.

Norm Asbjornson Hall is located on the southwest corner of Seventh Avenue and Grant Street. 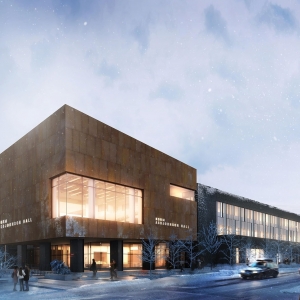