Join the Montana Institute on Ecosystems and the Grasslands Resilience Working Group at MSU for a special co-sponsored seminar featuring Dennis Jorgensen and Dr. Elizabeth Bird. Jorgensen and Bird will present the talk "The Path Back: Fort Peck Tribes' Community Buffalo Restoration Efforts" at noon on Wednesday, April 15 in 1-131 Wilson Hall.

Dennis Jorgensen is the World Wildlife Fund (WWF) Bison & Tribal Team Lead in the in the Northern Great Plains, which supports the establishment of five herds of at least 1,000 bison on tribal lands and within National Parks by 2025 to ensure that tribal communities thrive with bison and the long-term health of the species is secure. He has worked for WWF in the Northern Great Plains since 2007 when he was hired as the program's first field biologist. In 2013 Jorgensen was appointed vice-chair of the International Union for Conservation of Nature (IUCN) American Bison Specialist Group and is currently supporting long-term conservation planning for the species. He has published peer-reviewed research on the migrations of prairie rattlesnakes and long-billed curlews, and he has participated in research on the migrations and movements of mountain lions, pronghorn and mountain plovers. He completed his master's degree in 2009 at the University of Calgary studying the migrations of prairie rattlesnakes in Alberta.

Dr. Elizabeth Bird comes to her collaborations with the Fort Peck Assiniboine and Sioux from a broad background in community-centered research begun in the 1990s in the arena of farmer-driven sustainable agriculture research.  She began the Fort Peck collaboration in 2011 under the MSU leadership of Dr. Elizabeth Rink during which they assisted Fort Peck Community College and other partners to develop and establish a new Fort Peck Tribes Institutional Review Board. Fort Peck advisors on that initiative brought forward the question of the community health impact of the Fort Peck buffalo repatriation effort which then gave rise to Dr. Bird’s work on the Fort Peck Buffalo Project.  In this context, she has collaborated in the creation of educational and outreach opportunities for the people of the reservation to better connect with their buffalo relatives. The collaboration has also entailed research.  In 2013 the team conducted focus groups and interviews with respondents across the reservation to help identify how the people think about the relationship of well-being and the buffalo.  In 2015 Dr. Bird collaborated with World Wildlife Fund (Dennis Jorgensen) and the Fort Peck Tribes on a population-wide survey of attitudes toward the buffalo, including hunting and use of buffalo meat and products, and attitudes toward the buffalo management program. Dr. Bird holds a BA in Environmental Studies and a Ph.D. in History of Consciousness from the University of California, Santa Cruz.  Her current position is Project Development and Grants Specialist with the MSU College of Education, Health and Human Development, a position which allows her to continue to foster and conduct collaborations with various Fort Peck partners.

Watch the seminar live at https://global.gotomeeting.com/join/583370557 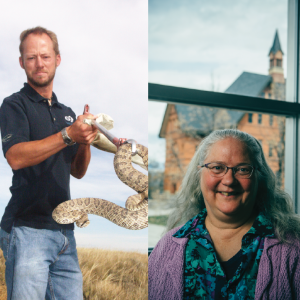