Classical Guitarists Nicholas Epple and Michael Videon will join forces for a concert on Friday, January 24, 7:30 PM at Reynolds Recital Hall on the MSU campus.

Epple will perform a selection of music for solo guitar featuring the Sonata Op. 61 by the early 20th century Spanish composer Joaquin Turina and a work by contemporary Russian composer Konstantin Vassiliev entitled Three Forest Pieces.  Also on his program are works by J.S. Bach, Mauro Giuliani and Miguel Llobet.

Nicholas Epple is a classical guitarist from Bozeman, Montana. He played music from a young age, starting with the violin and only later finding his passion for the guitar. He received his Bachelor of Music Degree in 2012 from Montana State University studying with Michael Videon. Nicholas then moved to Tucson, Arizona where he currently holds a Master’s in Music from the University of Arizona. He continues to study with Professors Tom Patterson, David Russell, Odair Assad, and Sergio Assad at the University of Arizona where he is currently pursuing his Doctorate of Musical Arts.

Music has taken Nicholas all over the world where he has performed in festivals, workshops, and competitions in France, Italy, Canada, and across the United States. During the summer of 2010 Nicholas studied at L’Accademia Musicale Internazionale in Siena, Italy with Dario Vannini.  He was able to return to Italy in the summer of 2015 where he was awarded a full scholarship to study in Volterra with Antigoni Goni, Rene Izquierdo, Elina Chekin, Gohar Vardanyan, and Maurizio Villa.

Michael Videon is an Associate Teaching Professor at the MSU School of Music where he has directed the guitar program since 1997.

Tickets are $10 or $5 for students.  Tickets will be available at the door. 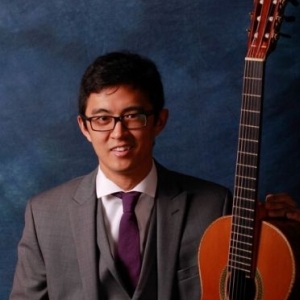