Nitrogen (N) loss from cultivated soils threatens the sustainability of agriculture. Nitrate accumulated in soil from fertilization or decomposition of soil organic N (SON) may be lost via leaching, which can reduce soil fertility and compromise water quality. Humans have increased reactive N on the planet by an order of magnitude over the past 150 years; most of this reactive N is used for fertilizer that helps feed a growing population and has produced a cascade of disruptions to global systems. In groundwater globally, nitrate concentrations commonly exceed human drinking standards. A notable example is the Judith River Watershed (JRW) in central Montana, where nitrate has been detected above the drinking standard since the 1960s. This dissertation work tackled this challenge in the JRW, where an interdisciplinary team engaged with farmers in a participatory research project, making observations across scales from points in fields to landforms to characterize water and N movement. At the landform scale we found, that five to nine of the 38 cm yr-1 of mean annual precipitation moves through soil to recharge groundwater and leaches 11 to 18 kg ha-1 yr-1 of nitrate-N from soil, approximately 20-30% of fertilizer rates but likely reflecting inmixing of nitrate from SON decomposition. Soil modeling indicated that water and N losses were dominated by intense precipitation periods, such that more than half of simulated deep percolation and leaching occurred in two of 14 model years. Simulations indicate that thinner soils (<25 cm) experience water and nitrate loss rates five to 16 times higher than thicker soils (>100 cm). Soil sampling demonstrated that during fallow periods, increased soil water facilitates conversion of SON to nitrate, priming soils for water and N loss with subsequent precipitation, resulting in disproportionately high leaching rates during and following fallow periods. Isotopic evidence further suggests that during fallow periods, nitrate is lost to the atmosphere via denitrification, a gas phase loss combining with leaching losses to compromise the goal of delivering N to crops. Our findings suggest that reduction of fallow, particularly on thin soils, may increase N use efficiency and reduce nitrate loss to groundwater. 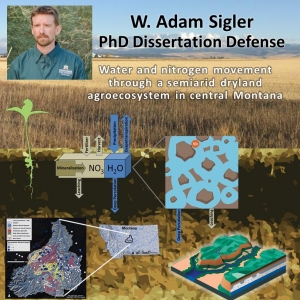