Wheat stem sawfly (WSS), Cephus cinctus Norton, is an economically devastating pest of cereals grown in the Northern Great Plains of the United States and Canadian Prairie Provinces. A wheat dominated cropping system, dryland farming, and limited effectiveness of management tools all favor repeated outbreaks. But the larval stage—the only feeding stage—is confined within a host stem until it emerges as an adult the following year. This limited mobility increases the larval vulnerability to mortality factors when host plant traits are hostile to survival. For instance, larval mortality is higher in solid stemmed wheat cultivars—known to be resistant—than in hollow stemmed wheat cultivars. Larval mortality is greater in barley than solid stemmed wheat cultivars. Traditionally, barley was recommended as an alternative rotational crop to prevent WSS outbreaks in wheat crops. But both solid stemmed wheat and barley kill neonates via host plant resistance traits. Currently, there is limited data available regarding barley host plant resistance. For instance, do currently grown barley cultivars kill neonates as well as in historical records? And, what is the impact of larval feeding injury on the grain yield of barley? Do WSS females display similar oviposition behaviors across barley cultivars that vary in susceptibility? To answer these questions. I conducted experiments in the field and the greenhouse. In the field, I assessed resistance and possible tolerance to WSS in barley by counting eggs and larvae per stem, the rate of stem cutting, and compared grain yield per stem across eight barley cultivars. Based on the number of eggs, ‘Hockett’ was the most attractive cultivar to WSS female (least antixenosis), while ‘Craft’ and ‘Celebration’ killed the greatest number of neonates due to antibiosis. Multiple decrement life table studies revealed that plant defense and cannibalism were two major causes of WSS mortality, as reported for wheat. We measured greater yield in infested stems with dead larvae (potential tolerance) than the grain weight in cut stems and both were greater than uninfested stems in all cultivars except 'Celebration’. A greenhouse study revealed that females preferred ‘Hockett’ over ‘Craft’ in both frequencies of oviposition behaviors and numbers of eggs deposited. Additionally, a greater amount of the WSS attractant (Z)-3-hexenyl acetate was found in aerations from ‘Hockett’ than those from ‘Craft’ when volatiles were collected from plants at Zadoks 34 and 49. The amount of the defensive compound linalool was greater in aerations from ‘Craft’ than from ‘Hockett’, providing a possible repellant mechanism. These results suggest that barley cultivars are equipped with varying levels of antibiosis, antixenosis, and tolerance traits against WSS. Thus, we can exploit these traits in the development of cultivars which can reduce WSS populations in the field and decrease the economic loss caused by this species. 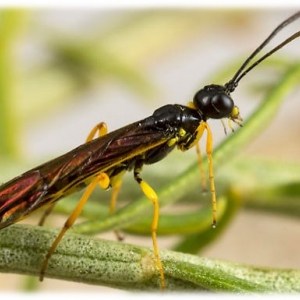