Dr. Martina Preiner is a postdoctoral researcher at the Institute for Molecular Evolution at Heinrich-Heine University, in Düsseldorf, Germany. She earned her PhD from Heinrich-Heine in January 2020, but her training involved several research visits including time at the University of Strasbourg, the University of Durham and the Max Planck Institute for Coal Research in Mülheim/Ruhr. Martina's thesis was “The abiotic pattern of biotic CO2 fixation.” She describes herself as an origin of life researcher aiming for true interdisciplinary collaboration and exchange, trying to connect the dots between geo- and biochemistry with focus on serpentinizing systems.

About her talk: Hydrogen gas, H2, is generated in alkaline hydrothermal vents from reactions of iron containing minerals with water during a geological process called serpentinization. It has been a source of electrons and energy since there was liquid water on the early Earth, and it fueled early anaerobic ecosystems in the Earth's crust. H2 is the electron donor for the most ancient route of biological CO2 fixation, the acetyl-CoA (or Wood-Ljungdahl) pathway, which unlike any other autotrophic pathway simultaneously supplies three key requirements for life: reduced carbon in the form of acetyl groups, electrons in the form of reduced ferredoxin, and ion gradients for energy conservation in the form of ATP. The pathway is linear, not cyclic, it releases energy rather than requiring energy input, its enzymes are replete with metal cofactors, it traces to the last universal common ancestor and abiotic, geochemical organic syntheses resembling segments of the pathway occur in hydrothermal vents today. In this talk, Martina will show that minerals found in serpentinizing systems catalyse the fixation of CO2 with H2 at 100°C under alkaline aqueous conditions. The product spectrum includes formate (up to 100 mM), acetate (up to 100 µM), pyruvate (up to 10 µM), methanol (up to 100 µM), and methane. All these compounds are important educts, products and intermediates of the acetyl-CoA pathway. With these simple mineral catalysts, the overall exergonic reaction of the acetyl-CoA pathway is facile, shedding light on both the geochemical origin of microbial metabolism and on the nature of abiotic formate and methane synthesis in modern hydrothermal vents. 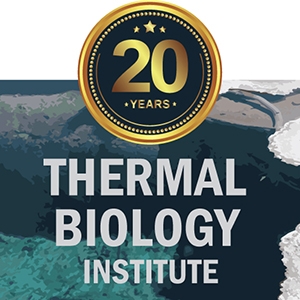