Czechoslovakia was liberated from the Nazis in May 1945, however the gradual sovietization and the dominance of the Communist party took place in the country. The Communists completed the takeover in February 1948 and the period of their totalitarian regime lasted for more than four decades. After the takeover, thousands of Czechs and Slovaks (up to 300 000 between 1948-1989), who sought the return of freedom and democracy to their homeland, left. Their first steps in the free world brought these people into the so-called displaced persons camps in Western occupation zones of Germany and Austria or in Italy. The first periodicals were published, the first seeds of political activity were born and later developed by numerous exile groups and entities. Almost seven dozens of newspapers, magazines and newsletters, and nearly one hundred ninety Czechs institutions, including political organizations, parties, academic clubs or think-tanks, operated in the free world after 1948. Despite the promising start and international support, the so called Council of Free Czechoslovakia, meant as the umbrella body for the entire exile, writhed in crisis, fell apart and reunited again, its members were wasting time with endless quarrels and were continuously losing the confidence of the exile public and their donors from the U.S. government. As time passed, the atmosphere in the exile changed, new topics, challenges and leaders raised. Dr. Nekola will discuss all aspects of the Czechoslovak Cold War exile (with a particular focus on the USA) in his contribution. 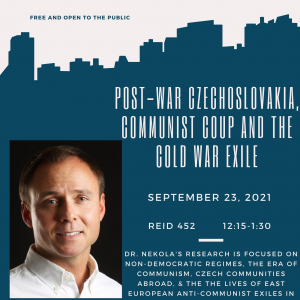