Come join Dr. Brenden Rensink as he talks about his new book, Native but Foreign: Indigenous Immigrants and Refugees in the North American Borderlands, and his work as the Associate Director of the Charles Redd Center for Western Studies.

Dr. Rensink's book "compares experiences of indigenous people who were labeled as 'foreign' after they traversed imposed North American borders into the United States in the 19th and 20th centuries. Moving in waves of traders, laborers, and political refugees, their histories challenge familiar constructs of "indigenous" and "immigrants" in American history and complicate borderlands and Indigenous histories in the North American West." 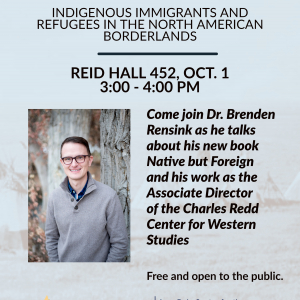