Abstract: Many organic cropping systems depend on organic amendments for maintaining crop yields and soil fertility. Weed control is often achieved through tillage, which can degrade soil and lead to a loss of organic matter (SOM). The objective of this two-year study was to determine how wheat (Triticum aestivum L.) grain yield, protein concentration, and above ground biomass (AGB), and indices of soil health including SOM, laboratory substrate-induced respiration (SIR), and field soil respiration (FSR) measurements would respond to compost applications in a Northern Great Plains dryland cropping system on Farnuf loam soils (fine-loamy, mixed, superactive, frigid Typic Argiustolls) near Geraldine, Montana. Cattle manure compost was applied once in spring of 2019 at 0 (Control), 14 (Low), 46 (Medium), and 137 (High) Mg dry weight ha-1 to a spring wheat and cover crop rotation. Compost did not impact wheat yield, AGB, or SOM content (p > 0.05). Differences were detected for the Low and High compost treatments compared to the Control in overall SIR rates and concentrations but not during any of four measurement periods (0, 7, 24 and 96 hours). The highest (median ± interquartile range [IQR]) SIR rates occurred at 24 hours (Control [25 ± 2], Low [28 ± 15], Medium [23 ± 5], and High [28 ± 5]). Cumulative FSR, however, was significantly higher (2.5 Mg C ha-1) for soils receiving the Medium compost rate compared to all other treatments including the Control, which respired ~2 Mg C ha-1 over the four-month measurement period. Together, these results indicate that when cattle manure compost is applied to fine-textured dryland soils, wheat grain yields and protein concentration, as well as soil properties like SOM, do not appear to be enhanced in the short-term. These results also indicate that, one year after application, compost treatments may be detectable via soil health indices such as SIR and FSR, but these results can be inconsistent. As demand for organically grown, dryland crops increase, future research should clarify the most sensitive, robust, and cost-effective indices of soil health capable of guiding improved agricultural practices, including compost amendments.

This seminar is offered virtually at the following Webex address: 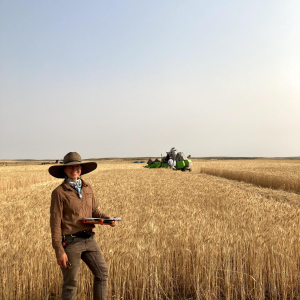