Feeding by the developing insects causes the top terminal to suddenly wilt and die in early summer. This is often 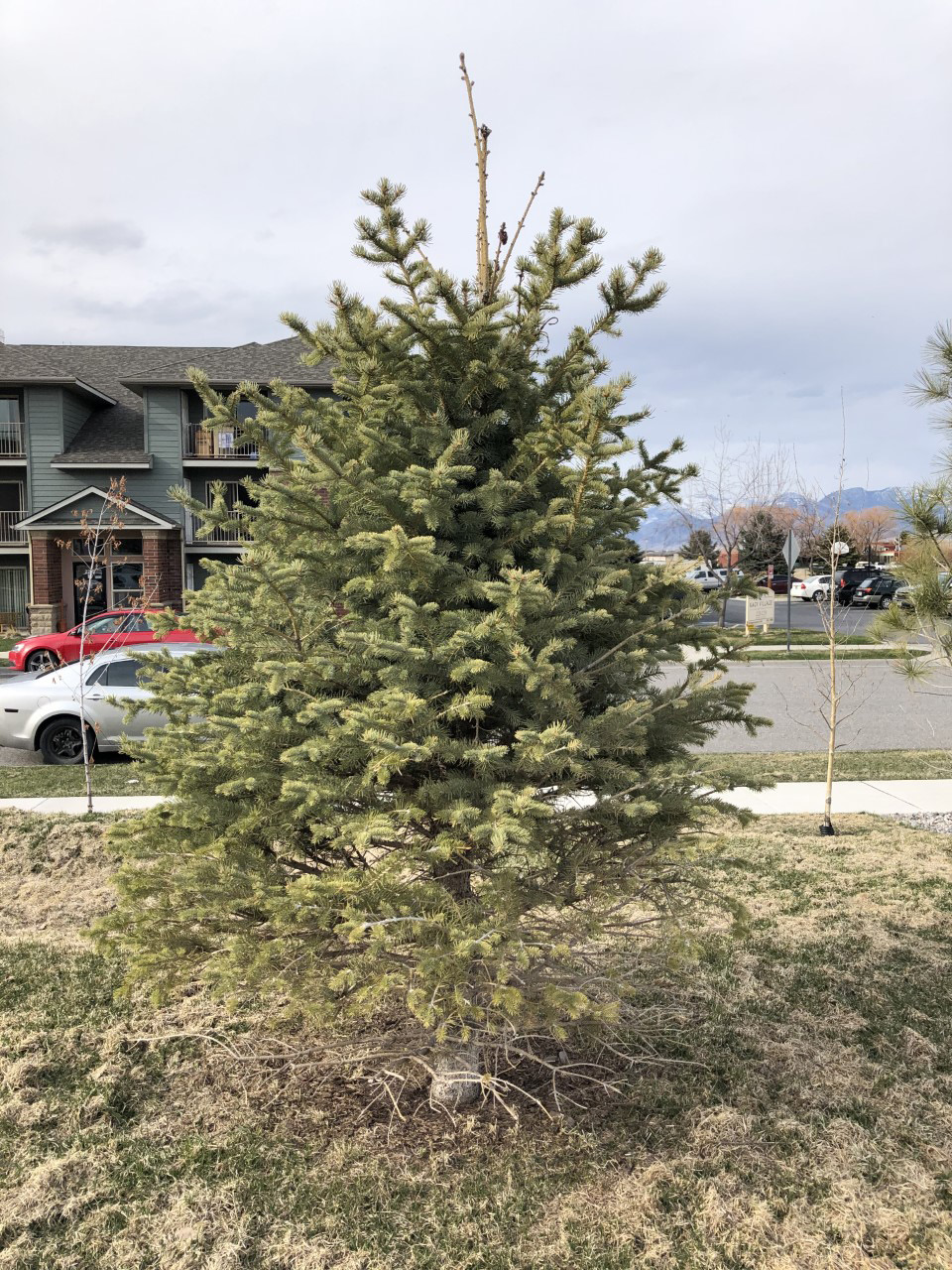 referred to as a “shepherd’s crook”. Once the top leader is killed, some side branches will change their growth habit and will grow upward to replace the dead leader.

The weevil adults become active in early spring. They feed on the main branches near the leader and insert eggs into feeding cavities. Eggs hatch in about two weeks, and the larvae (immatures) will tunnel under the bark. The larvae pupate, and adults emerge in late July-August. The adults overwinter in leaf litter and debris around spruce trees.

Only the top leader and upper branches of the tree are affected by the insect. The infested terminal can be clipped, and a new leader can be trained. This should be done when the larvae are still inside the branch (before the end of July). Terminals should be cut only as far down as necessary to remove the weevil larvae. Destroy the pruned terminals. Rake up the needles and debris under the tree in the fall. 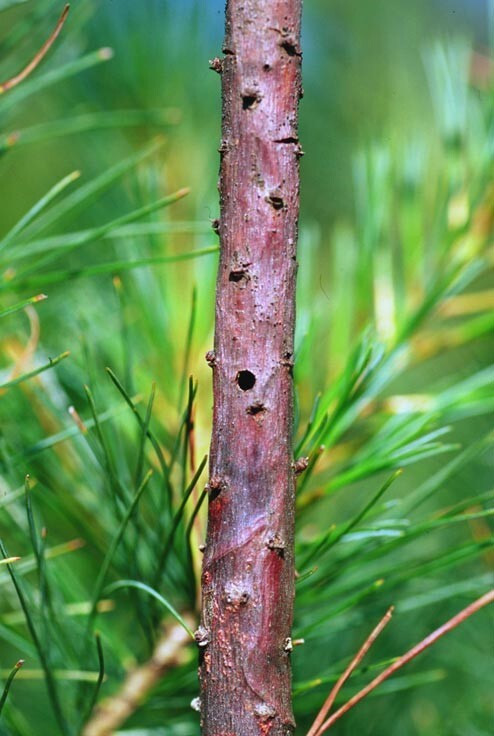 Chemical controls are only recommended if necessary, and the timing of application is critical. A common management strategy is to spray the terminal of the tree in the spring when adults are climbing to the top to lay eggs (April through May, depending on weather). Some of the active ingredients include permethrin (Astro), bifenthrin (OnyxPro, Reveal, Batallion 2, Tigris Bifen 2), or cyfluthrin (Tempo). Sprays targeted at the terminal of the tree will not be as effective once the larvae have burrowed underneath the bark.

Systemic insecticides with the active ingredients imidacloprid (Xytect, Imidastar, Acecap, Zylam), emamectin benzoate (Tree-Age),
dinotefuran (Safari), or abamectin (Aracinate) can be applied as a soil drench or microinjection in the early spring followed by several days
of watering to allow for sufficient root uptake.

The white pine weevil, which kills the tops of conifers, is the most serious economic insect pest of white pine in Maine. Weevil attacks result in trees that are multi­topped, crooked, and of much lower value for sawtimber. Appearance and development of ornamental trees are also affected. Trees in open areas, plantations, and forest clearings are most severely damaged.

White pine weevil most commonly attacks eastern white pine, jack pine, and Norway spruce. However, many other pines and spruces, including ornamentals, are also susceptible. 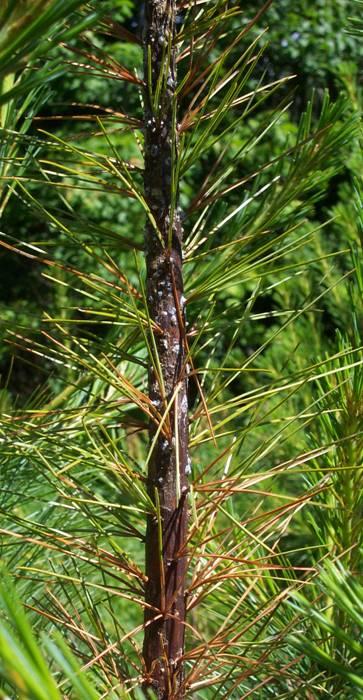 One of the first symptoms of attack in the spring is the presence of pitch flowing from feeding punctures in the previous year's leading shoot (figure 1). Beginning in late June and early July, the new growth on infested shoots starts to droop (figure 2). Shortly thereafter the tops die and turn brown. Up to 2­3 years of top growth may be destroyed          (figure3).

Life Cycle
Starting in early spring, weevil eggs are laid in the bark of the previous year's leader. After hatching, the legless grubs start tunneling downward under the bark, eventually girdling the infested stem and killing the top 1 1/2 -­ 2 feet of the tree. Larvae pupate in the main stem, and by mid  ­July adults begin to emerge. To have any effect, pruning must be done before this time. 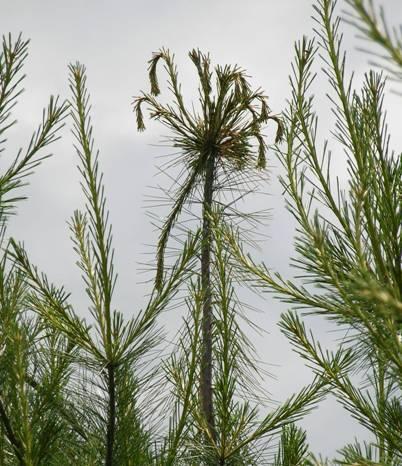 Wilting of leaders may be detected anytime after late June. Pruning should be completed when the wild raspberries start to ripen (early to mid­July, depending on your location), while weevils are still in the wilted or dead terminal shoot. Pruning before completion of shoot growth encourages secondary budding on the pruned leader and may result in faster terminal recovery. Early pruning can also remove the weevils when only one season’s growth has been damaged, rather than two or three. Pruning after mid-­July, once the adults have emerged, is not effective. 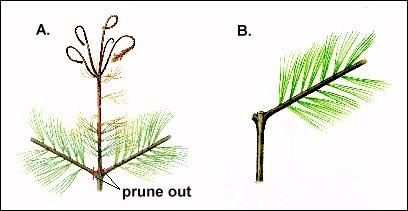 Figure. 5. Pruning following a weevil attack should remove the wilted or dead terminal and all laterals except one. This lateral will straighten over a period of a few years (illustration: Julie Janke, Scientific Illustrator, Afton, MN).

Corrective Pruning – After the removal of infested leaders, tops of trees should be pruned in such a manner that all but a single dominant shoot at the topmost healthy whorl are removed to encourage formation of a new leader    (figure 5). Corrective pruning may be postponed until the following year to make sure that at least one live lateral will survive possible damage (e.g. from ice, snow, or a second year of weevil attack).

Shade – Partial shade helps reduce weevil attack by reducing temperature and bark thickness. Leaving some overtopping hardwoods or other conifers may help protect young pine and spruce from weevil damage when they are most susceptible. Density of the overtopping species should be managed to maintain about 45-­50% shade until final release when the trees reach a height of 16 to 18 feet. Closer spacing of trees in a plantation will stimulate height growth and natural pruning to permit faster recovery.