The old adage attributed to Napoleon that an army marches on its stomach did not exclude either the Confederate or Union army. Supplying food was imperative for maintaining a viable fighting force. The various food supplies, though, also represented excellent feeding and breeding sites for insects. The daily Union marching ration for fresh beef was 11/4 pounds, although there were occasions when soldiers drew two or more days' rations. A soldier usually kept meat and food rations in the haversack that he slung on his side. If his meat ration was not infested when he received it, it likely was to become so soon. One Yank related, " Fresh-killed beef . . . had to be eaten with the odor and warmth of blood still in under penalty of finding it flyblown before the next meal" (Wiley 1992). Another soldier mused,

"Yesterday morning was the first time we had to carry our meal for the maggots always carried it till then. We had to have an extra gard to keep them from packing it clear off" (Wiley 1992). The commissaries and quartermasters were keeping more than soldiers fed. 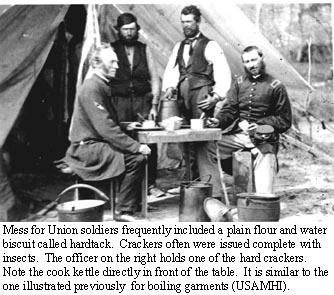 If fresh beef was not supplied, then soldiers received a meat ration as ham or bacon, salt beef (called salt horse), or salt pork (called sow-belly). Pickling was done to preserve the meat and reduce spoilage and contamination. But, the pickling process almost made the meat inedible anyway. Salt horse "was thoroughly penetrated with saltpetre, was often yellow-green with rust from having lain out of brine, and, when boiled, was four times out of five if not nine times out of ten a stench in the nostrils, which no delicate palate cared to encounter at shorter range" (Billings 1887). The bacon or ham issue " was usually black, rusty and strong, and decidedly unpopular" (Billings 1887). Often the only recourse was soaking the pickled meats in water overnight before any attempt was made to eat them.

Meat was not the only insect-infested ration--other victuals also came with insects. One disgruntled Yank complained,

"We live so mean here the hard bread is all worms and the meat stinks like hell . . . and rice to or three times a week & worms as long as your finger. I liked rice once but god damn the stuff now" (Wiley 1992).

An Andersonville prisoner recorded that his beans were "well seasoned with sand and bugs" (Futch 1968). Probably one of the best recorded havens for insects during the Civil War was a plain flour and water biscuit or cracker. Issued to Union soldiers, this was commonly called "hardtack." Hardtack was distributed in two other forms besides the insect-infested variety. One variety was moldy or wet, a condition that probably resulted from exposure to the weather prior to distribution or from being packaged too soon after baking. A second variety was the hard form, which was aptly named. These crackers, also called "teeth dullers" or "sheet-iron crackers," were so hard that one soldier claimed to have carved a durable violin bridge from one of them (Wiley 1992). Other soldiers, apparently unable to break the crackers with their hands, had to beat the crackers with the butts of their muskets (Wiley 1992). One camp dialogue attested to the hardness of this variety of hardtack.

Sergeant: Boys I was eating a piece of hard tack this morning, and I bit on something soft; what do you think it was?
Private: A worm?
Sergeant: No by G-d, it was a ten penny nail. (Wiley 1992)

The third type of hardtack, already mentioned and alluded to, was the insect-infested variety. Yanks referred to this kind as " worm castles" (Wiley 1992) and some went to great lengths in describing its inhabitants. Billings (1887) elaborated on the " maggots and weevils" that he encountered in hardtack.

These weevils were, in my experience, more abundant than the maggots. They were a little, slim brown bug an eighth of an inch in length, and were great bores on a small scale, having the ability to completely riddle the hardtack. I believe they never interfered with the hardest variety. (Billings 1887)

Moldy and wet hardtack was usually made good at the next drawing of rations, but soldiers routinely had to accept the infested crackers. This hardtack "had to be pretty thoroughly alive, and well covered with the webs which these creatures left, to insure condemnation" (Billings 1887). Billings' comment is interesting because he is actually describing multiple infestations of the hardtack. The "maggots and weevils" he mentions are probably the immatures and adults of some of the stored product weevils (e.g., granary weevil, Sitophilusgranarius [L.] or rice weevil, S. oryzae [L.]). However, the " webbing " that he mentions is probably the work of stored product Lepidoptera (e.g., Indianmeal moth, Plodiainterpunctella[Hübner] or one of the flour moths). Entomological taxonomy was not the forte of most soldiers. 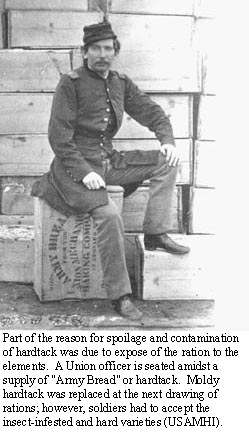 Some " worm castles " were infested thoroughly. One soldier quantified the inhabitants in his hardtack,

"We found 32 worms, maggots, &c in one cracker day before yesterday. We do not find much fault, however, but eat them without looking as a good way to prevent troublesome ideas" (Wiley 1992).

This is actually a lot of insects when one considers that the dimensions of this cracker were only 31/8" x 27/8" x 1/2". Another Yank took an optimistic view on his hard bread ration, " All the fresh meat we had came in the hard bread . . . and I preferring my game cooked, used to toast my biscuits " (Wiley 1992). John Billings' (1887) reflection on hardtack reveals both the hardtack epicurean and the seasoned veteran.

But hardtack was not so bad an article of food, even when traversed by insects, as may be supposed. Eaten in the dark, no one could tell the difference between it and hardtack that was untenanted. It was no uncommon occurrence for a man to find the surface of his pot of coffee swimming with weevils, after breaking up hardtack in it, which had come out of the fragments only to drown; but they were easily skimmed off and left no distinctive flavor behind. If a soldier cared to do so, he could expel the weevils by heating the bread at the fire. The maggots did not budge in that way (Billings 1887).

Insect-infested hardtack was even sung about. Soldiers parodied JohnBrown'sBody with:

Worms eat hearty in the commissary stores
While we go starving on. (Wiley 1992). 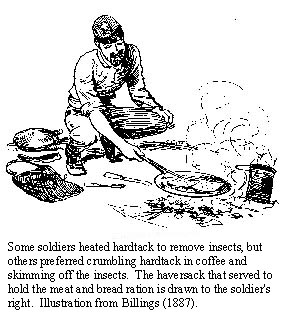 In the western theater, soldiers parodied the Stephen Foster song, HardTimes, to lament the condition of their hardtack. When Union General Nathaniel Lyon overheard the stanzas, he ordered the cooks to serve up corn-meal mush as a substitute for the bad bread. The soldiers responded by again altering the song's chorus:

You were old and very wormy, but we pass your failings o'er
O hard crackers, come again once more! (Billings 1887).

Despite the growling and derision, most soldiers were grateful for the sustenance hardtack provided, insects or not. As one historian noted, "Hunger compelled soldiers to eat them and taste was acquired with use " (Wiley 1992).