The relationship between lice and soldiers was undoubtedly one of the closest entomological associations that occurred during the war. Head lice (Pediculus humanus capitis DeGeer) and body lice (Pediculus humanus humanus L.) are most prevalent in crowded conditions where personal hygiene and sanitation are lacking, but lice can be found even on the most fastidious person. The use of layered wool clothing worn continuously provides the proper temperature and humidity for body lice (Ebeling 1978), and the continual wearing of uniforms typified soldiering during the Civil War. Crab or pubic lice (Pthirus pubis [L.]) also are acquired through close contact but more readily through sexual contact. As their common names suggest, the head louse is usually restricted to the hair on the head region; the body louse is found on its host's clothing and moves to adjacent areas to feed. The crab louse, which looks like a miniature crab, is restricted to the genital areas of its host. The Civil War soldier may have suffered from any or all of the lice known to attack man, but a majority of references mention body lice. Victorian morality may have precluded many soldiers from referring too often to crab lice.

Human lice are tiny insects. Adult head lice are 1/8 of an inch long and body lice are slightly larger. Crab lice are the smallest of the lice, being only 1/16 of an inch long. Lice eggs, called "nits," are smaller yet, ranging from 1/30 to 1/50 of an inch depending upon species (Snetsinger 1982). While body lice lay their eggs in the seems of clothes, head and crab lice attach their eggs to hair follicles.

All of the lice that infest man feed on blood through a fine tube-like mouth. Bites from lice create small itchy spots that usually cause scratching and may result in secondary infections. Human lice can also transmit the pathogen, Rickettsia prowazekii, which causes epidemic (louse-borne) typhus. Louse-borne typhus is characterized by a high fever that continues for approximately 2 weeks, muscle aches, mental confusion, stupor, and red spots that cover the body. Under epidemic conditions, the disease may reach fatality rates of nearly 100%.

Soldiers in the Civil War gave the body louse numerous names: bluebellies, rebels, tigers, Bragg's body-guard, zouaves, graybacks, and vermin. They were so common that it would have been unusual for a soldier not to harbor vermin. Lice had no allegiance to any flag, nor did they discriminate on the basis of rank. It was recorded that an orderly of a company officer picked 52 graybacks from the shirt of his chief at one sitting (Billings 1887). Although soldiers felt disgraced when they first became infested, this feeling soon diminished as their situation became universal among their comrades. Many soldiers came to "a state of pleasant unconcern," one even declaring he could not sleep soundly unless he "had a few graybacks gnawing on him"(Wiley 1994).

Different techniques were employed for delousing, or "skirmishing,"as the soldiers called it. Soldiers often could be found picking through their clothing or doing their "(k)nitting work". Some used faster delousing methods such as boiling clothes in salt water or singeing clothes over fires. The latter technique reminded one Confederate, whose clothes were "well stocked with big fat fellows," of popping corn (Wiley 1992). One individual recalled his best louse fighting remedy "during the '60's down in'Old Virginny'" was rubbing the seams of his clothes with blue ointment until he could find time to boil them (Anonymous 1904). Military terms were applied to the various delousing techniques. Killing lice was called "fighting under the black flag," throwing away infested clothing was "giving the vermin a parole," and wearing clothing inside-out was "executing a flank movement" (Wiley 1992). 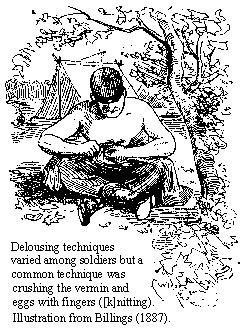 Delousing was not without hazards. Some members of the 3rd Pennsylvania Reserves (P.R.V.C.) decided they would venture to a different area for the purposes of louse removal.

Early one morning, some of the boys determined to go up the creek so far that no vermin would be found floating on the water. They had carefully kept their clothes up the trees until they got full suits. Afraid to trust the precious bundles in their hands, they swung them over their shoulders on sticks. Up the levee they marched, and finding a nice place, were soon enjoying a glorious splash. Soon the well-known whistle of the bullet was heard, and they discovered the insurgent pickets on the other side. With the creek before them, a swamp behind, a long embankment their only means of retreat, and their clothes out of reach, they found themselves in a pretty predicament. Lying behind the embankment stripped, with the scorching rays of the sun pouring down upon them, soon became uninteresting; and to save themselves from broiling, they rolled in the mud and tried baking. This operation, renewed as soon as the mud commenced cracking on them, formed the principal feature of their amusement until darkness covered their retreat; but it killed the vermin. (Woodward 1883)

"As we had destroyed all our clothing except what we stood in, and as soap was an article that could neither be bought nor 'appropriated,' and as clothing was issued by piece-meal, it [delousing] was a task more easily undertaken than accomplished"(Woodward 1883). Conditions must have improved for the P.R.V.C. "By dint of washing, scrubbing, scouring and constant vigilance, the triumph was achieved; and the boys came out in their new uniforms as clean and bright as new dollars" (Woodward 1865, 1883). It was probably safe to say respite from the graybacks was only short-lived.

Some soldiers fancifully attested to the learning abilities of the ubiquitous louse. "So universal were they [the lice] at that time, that none thought of being ashamed of them, and we have even heard the boys declare that they knew all the bugle calls and had become so expert in drill as to go through the battalion movement quite accurately, and to have their regular guard mountings and dress parades"(Woodward 1865). 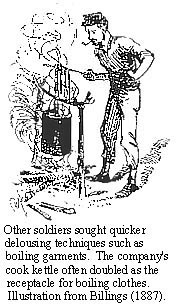 Although lice were problematic in Union and Confederate armies, prisoners of war suffered far worse. An Andersonville prisoner recorded a day of "lively skirmishing," noting that he "caught and killed 17 or 20 lice, all fat and in good condition"(Futch 1968). At the Andersonville hospital, an investigating Confederate surgeon stated that the patients seemed indifferent to their squalor and added that their clothing was extremely filthy and "scaly with vermin"(Futch 1968). A quart or more of lice was reportedly removed from the clothing of a dead comrade at the prison. That however, was probably an exaggeration because 400 lice would be an unusually large infestation even under the most squalid conditions (Snetsinger 1982).

Lice were not totally without redeeming value. They actually provided a source of entertainment and income for some soldiers. Wagers were placed on "louse races" where the arena was often a mess plate. One soldier, flaunting a champion louse, demanded that the lice be raced from individual plates. After the soldier profited substantially from the events, it was discovered that he had heated his plate prior to the different speed trials (Wiley 1994). In addition, lice fights were held in which bets were placed and the lice were pitted against each other. One veteran claimed that it was not unusual to see a dozen groups of men involved in these fights (Wiley 1994). Even the inhumane conditions of Andersonville did not preclude prisoners from participating in the fights (Futch 1968).

Lice were also the source of some great yarns and waggery. Before retiring for bed, one Virginia private recited his version of the common bedtime prayer:

Now I lay me down to sleep,
While gray-backs oe'r my body creep;
If I should die before I wake,
I pray the Lord their jaws to break. (Wiley 1994)

Several Confederates claimed they caught lice embellished with the letters C.S. (Confederate States) and I.W. (In for the War) (Wiley 1994). One rebel related, "I pulled off a Shirt last night and threw it down; this morning I saw it moving first one way and then another; I thought at first that there was a rat under it, but upon inspection found it was the lice racing about hunting for a Soldier"(Wiley 1994). Andersonville inmates also commented on the size and strength of lice with admirable good humor; they spoke of "gray-back raising" and boasted of the feats of the lice they pretended to be training for exhibition at the next "vermin fair" (Futch 1968).

Next Section: "Feaing" The War