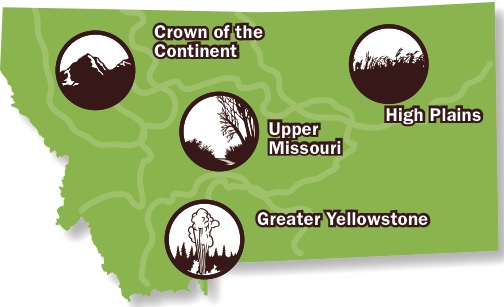 What is an ecosystem?

An ecosystem, simply defined, is a community of all the living and non-living things in a specific geographic area. An ecosystem can be small, such as the area under a pine tree or a single hot spring in Yellowstone National Park, or it can be large, such as the Rocky Mountains, the rainforest or the Antarctic Ocean.

Whether alive (biotic) or not alive (abiotic), all components of an ecosystem impact each other directly or indirectly. For example, a small change in the temperature or moisture in soil (which is abiotic) can affect the microscopic organisms that live within it. The number and health of those micro-organisms then affect the plants that grow in the soil, and the plant growth then impacts the animals (including humans) in the food chain.

Defining and naming ecosystems is difficult because it’s not always clear where the boundaries lie. Sometimes ecosystems are based on natural topographic features, such as a mountain range or the edges of a lake. Other times, scientists outline ecosystems based on shared characteristics, such as an area with similar snowfall or flooding patterns. And sometimes, we define an ecosystem based on man-made boundaries, such as all the counties that rely on water from a particular river. As you can imagine, ecosystems often overlap and can also be subsets of one another.

Because there are no cut-and-dried answers to how an ecosystem’s boundaries are drawn, different people and organizations have developed their own systems.

National organizations such as the U.S. Forest Service and the Natural Resources Conservation Service also use their own systems, and their classifications of ecosystems usually overlap state and even international boundaries. Some conservation organizations define ecosystems based on threatened or endangered species that live in them.

You might even argue that the State of Montana’s “Tourism Regions” are like ecosystems because they are based on common factors that bind members of these geographic areas together.

For its research projects, the Montana Institute on Ecosystems has delineated four major Montana ecosystems: the Crown of the Continent, the Greater Yellowstone Ecosystem, the Upper Missouri, and the High Plains Ecosystem.

In the High Plains region surrounding the Fort Belknap Reservation, researchers from Aaniiih Nakoda College are studying “prairie potholes” – depressional wetlands that were formed as glaciers receded across the continent during the last ice age. These prairie pothole wetland areas are home to the breeding and nesting grounds for more than half of all migrating ducks in North America and changes in climate may affect seasonal precipitation, thus negatively impacting the birds, amphibians and aquatic insects that call these areas home.

Crown of the Continent Ecosystem

In the Crown of the Continent ecosystem surrounding Glacier National Park, researchers are studying how the floodplains of large rivers, such as the North Fork of the Flathead, impact the overall health of the river. Such work is important to everyone who lives, works or recreates on rivers, from fishing guides and rafters to industrial users and regulators.

Scientists in the Greater Yellowstone Ecosystem are using paleoecology–the study of historical human-caused and natural events –to reconstruct a record of wildfires across the region. With this historical record of fire’s impacts on forests and grasslands, scientists can make predictions about how fire will impact the West in times of changing climate.

In the Tenderfoot Creek Experimental Forest (TCEF) north of White Sulphur Springs, researchers are measuring how much methane gas is released by microbes in the soil to see how changes in rain and snowpack impact vegetation growth. Their work will help forest managers prepare for and respond to drier or wetter conditions.