Reframing the Endangered Species Act: The case of the Yellowstone Grizzly Bear Recovery 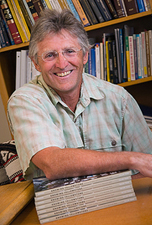 Did listing the Yellowstone Grizzly bear affect the current amenity driven economy in the Greater Yellowstone region, if so, how? This project will examine if two federal public lands agencies adapted their land use policy after the Yellowstone Grizzly bear was listed in 1975 under the Endangered Species Act (ESA). Through changes in conservation practices and commodity development, these adaptations to land management may have had long term impacts that influenced the contemporary regional economy of the Greater Yellowstone Ecosystem (GYE). Methods include reviews of historic planning and budget documents.

The conservation and restoration of the Yellowstone Grizzly bear provides a case study of the indirect costs and benefits to human communities stemming from application of the Endangered Species Act (ESA). A study of the regulatory documents and events after the Yellowstone Grizzly bear listing may provide useful lessons for understanding the role that conservation of a large predator plays in regional economic development. Specifically, this project will look to evidence of changes in land use policy by the US Forest Service and the National Park Service post listing of the bear. This work will inform the more general question of the long term economic impacts, if any, that result from the conservation of large predators to human communities in the Greater Yellowstone Ecosystem.

This issue is important as restoration ecology and reintroduction of large predators continues to be proposed by ecologists and conservation activists. Grey and red wolves, grizzly bears, wolverines, and lynx are several predators currently being considered for restoration of their native habitat in western states and the ESA is the vehicle for doing so.[i] Elsewhere in the world, snow leopards, African wild dogs, Bengal tigers, and a host of other predators have been proposed as candidates for restoration. While the ecological “top down” impacts of predators are relatively well understood, the long term socioeconomic impacts of this contentious area of public policy are less so. The results of a four-decade experiment in restorative ecology based in the GYE may provide insight to the role of regulatory acts such as the ESA has on public management and private prosperity.

Proximity to public lands and their management for amenity values are often cited as important drivers of economic prosperity in rural and micropolitan counties – especially in the Rocky Mountain west.[i] Public land management is only a proximate variable however, that is; it may be closely linked to rural prosperity but does not explain how the condition of managing public lands that resulted in rural prosperity occurred. This project will examine the listing the Yellowstone Grizzly bear and the subsequent management paths taken by regional federal public land agencies and its potential impact on the regional economy and community well-being.

The ESA is under constant political scrutiny. The issue is often framed as a trade off between those who promote species preservation and those promoting economic activity.[ii]  Direct, positive economic impacts of species listing are often a difficult case to make in terms of economic efficiency of public resources when compared to commodity production. Expanding the examination of the role of species listing to agency management behavior may move the discussion from direct and short-term financial and political expenditures to the larger impact of ESA policy over a long period of time.

Given the high profile of Yellowstone National Park as the world’s first national park, policy experiments such as species restoration (i.e. wolf reintroduction, catch and release fishing) have global influence. Lessons learned may be exportable to other locations faced with similar conservation decisions.

Vukomanovic, J. and Orr, B. (2014). “Landscape Aesthetics and the Scenic Drivers of Amenity Migration in the New West: Naturalness, Visual Scale, and Complexity.” Land3:390–413.

Mansfield, E. O. (2016). Applying an economic base analysis to counties in the Rocky Mountain West: Finding a typology and illuminating socioeconomic patterns. University of Idaho.