Early vigour in wheat: could it lead to more severe terminal drought stress under elevated atmospheric [CO2] and semi?arid conditions? 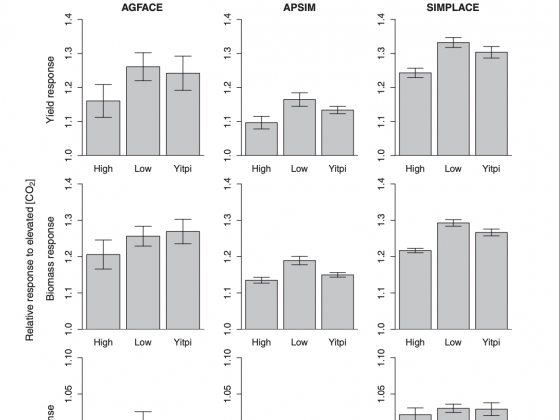 Early vigour in wheat is a trait that has received attention for its benefits reducing evaporation from the soil surface early in the season. However, with the growth enhancement common to crops grown under elevated atmospheric CO2 concentrations (e[CO2]), there is a risk that too much early growth might deplete soil water and lead to more severe terminal drought stress in environments where production relies on stored soil water content. If this is the case, the incorporation of such a trait in wheat breeding programs might have unintended negative consequences in the future, especially in dry years. We used selected data from cultivars with proven expression of high and low early vigour from the Australian Grains Free Air CO2 Enrichment (AGFACE) facility, and complemented this analysis with simulation results from two crop growth models which differ in the modelling of leaf area development and crop water use. Grain yield responses to e[CO2] were lower in the high early vigour group compared to the low early vigour group, and although these differences were not significant, they were corroborated by simulation model results. However, the simulated lower response with high early vigour lines was not caused by an earlier or greater depletion of soil water under e[CO2] and the mechanisms responsible appear to be related to an earlier saturation of the radiation intercepted. Whether this is the case in the field needs to be further investigated. In addition, there was some evidence that the timing of the drought stress during crop growth influenced the effect of e[CO2] regardless of the early vigour trait. There is a need for FACE investigations of the value of traits for drought adaptation to be conducted under more severe drought conditions and variable timing of drought stress, a risky but necessary endeavour.