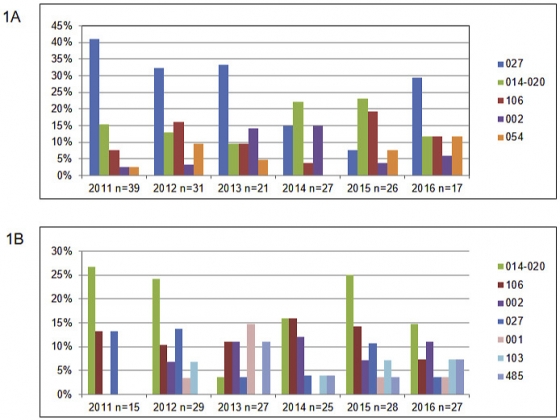 Background Geographic and temporal trends in the distribution of PCR ribotypes for Clostridioides difficile associated diarrheal isolates obtained in the United States (US) are changing. As part of a US national surveillance program of C. difficile susceptibility to fidaxomicin, we quantified the distribution of PCR ribotypes of stool isolates collected from 2011 to 2016. Methods C. difficile isolates or C. difficile toxin + stools from patients with C. difficile infection (CDI) were submitted for testing to Tufts Medical Center from 6 geographically distinct medical centers. Following isolation and confirmation as C. difficile, approximately 35% of the isolates were randomly sampled, stratified by center, for PCR ribotyping by capillary gel electrophoresis. Toxin gene profiling was performed on all isolates. Results 939 isolates from a total of 2814 (33.3%) isolated over the 6 years were analyzed. Seventy unique ribotype were observed, including 19 ribotypes observed 10 or more times. Sixteen ribotypes were not previously observed in our data base. Ribotype 027 declined by more than 60% over the 6 years of the survey from 35.3% to 13.1% (p?