The first dinosaur egg was soft 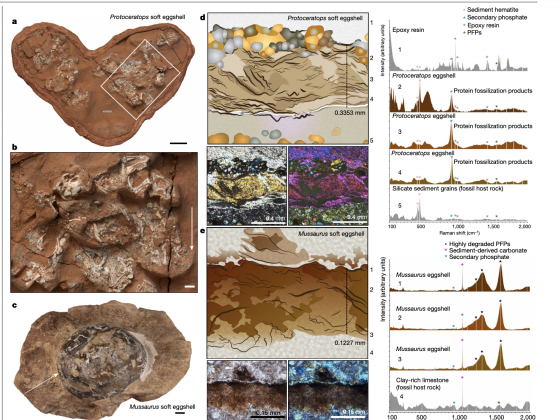 Calcified eggshells protect developing embryos against environmental stress and contribute to reproductive success1. As modern crocodilians and birds lay hard-shelled eggs, this eggshell type has been inferred for non-avian dinosaurs. Known dinosaur eggshells are characterized by an innermost membrane, an overlying protein matrix containing calcite, and an outermost waxy cuticle. The calcitic eggshell consists of one or more ultrastructural layers that differ markedly among the three major dinosaur clades, as do the configurations of respiratory pores. So far, only hadrosaurid, a few sauropodomorph and tetanuran eggshells have been discovered; the paucity of the fossil record and the lack of intermediate eggshell types challenge efforts to homologize eggshell structures across all dinosaursNorell, Mark A.. Here we present mineralogical, organochemical and ultrastructural evidence for an originally non-biomineralized, soft-shelled nature of exceptionally preserved ornithischian Protoceratops and basal sauropodomorph Mussaurus eggs. Statistical evaluation of in situ Raman spectra obtained for a representative set of hard- and soft-shelled, fossil and extant diapsid eggshells clusters the originally organic but secondarily phosphatized Protoceratops and the organic Mussaurus eggshells with soft, non-biomineralized eggshells. Histology corroborates the organic composition of these soft-shelled dinosaur eggs, revealing a stratified arrangement resembling turtle soft eggshell. Through an ancestral-state reconstruction of composition and ultrastructure, we compare eggshells from Protoceratops and Mussaurus with those from other diapsids, revealing that the first dinosaur egg was soft-shelled. The calcified, hard-shelled dinosaur egg evolved independently at least three times throughout the Mesozoic era, explaining the bias towards eggshells of derived dinosaurs in the fossil record. 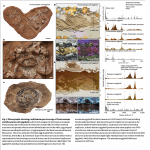