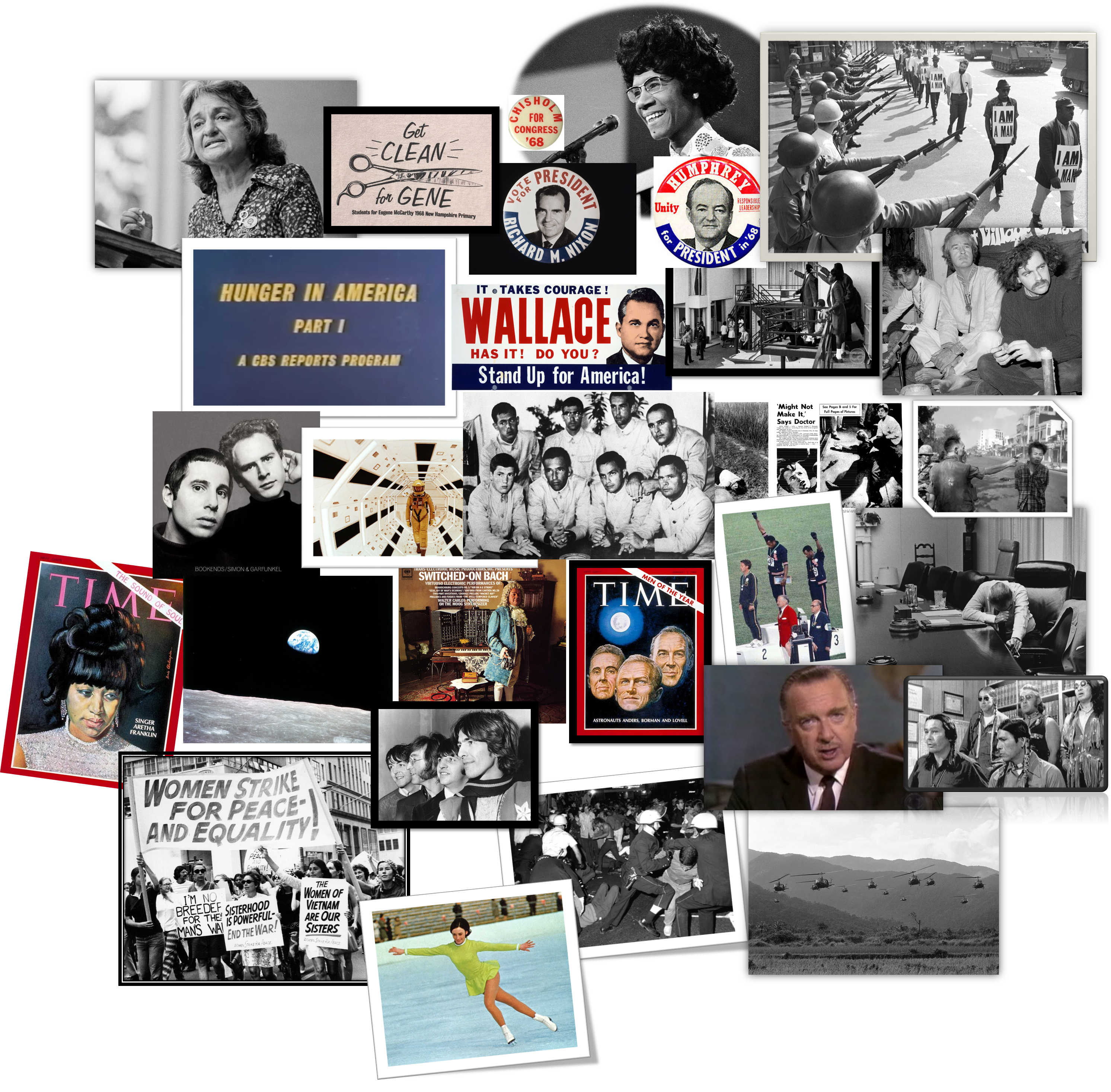 NOTE: A meeting to discuss this proposed course will take place April 3, 2018, noon-1PM, Jabs Hall 207.  All interested faculty and staff are invited. Please come, and please bring a friend.

If you are interested in finding out more about the proposed course but cannot come on April 3, please send an email to [email protected] to be added to the distribution list.

This is a proposed special interdisciplinary, multi-instructor course based on the confluence of “1968 in America.”  Many historic threads of the 20th century converged in that storied year, and many of our present-day challenges can be traced back to threads passing through 1968.

A few examples include:

A single special topics course obviously cannot possibly cover every relevant thread, but the hope would be to discuss the framework and come up with a course outline involving several topics that can be intertwined in a meaningful and provocative manner using areas about which each instructor could be passionately personal.

The course will contain six threads, with each thread occupying approximately two weeks of the semester. The thread topics will be conceived deliberately so that connections and cross-linkages are made clear.

The in-class format will encourage the use of multimedia: videos, film clips, audio recordings, images, examples, artifacts, etc., to create a dynamic and compelling classroom environment.

The coordinating committee (instructors) for the course will first need to choose the six particular “threads” and decide who will be responsible for preparing and presenting each portion of the course.

This will likely mean six key instructors, each having a “back room” of others who contribute ideas, instructional material, or direct participation.

Besides the intellectual challenge of deciding how best to present the thread, the key instructors will need to have a set of planning meetings in which the linkages between and within the threads are highlighted. For example, an American politics thread and a music and art thread will have ways of understanding the mutual influence of these forces upon each other, and the corresponding threads will highlight the mutuality.

Each thread will occupy three periods of class time (225 minutes). Each thread is conceived to consider (i) events and ideas that preceded 1968, (ii) explain the key events in the late 60s that reflect the zeitgeist, and then (iii) consider what has happened in the 50 years since.

In a particular thread, the instructor(s) will create a set of learning experiences for the students, including lecture, discussion, videos/movies, guest speakers, demonstrations, and so forth. Instructors will also assign appropriate out-of-class readings, supplementary material, “homework” exercises, etc.

After each pair of two threads, a week will be devoted to reflection and writing. Class time will be used for peer-reading of classmates’ essays and comments, and ideally there will be time for a relevant film or other event—probably in the evening outside of class time.

The last two weeks of the semester will have special presentations further tying together the various threads. One possibility is to have a marquee lecture looking back critically over the last 50 years and consider what has truly changed and what has largely remained unchanged, then try to extrapolate the threads into the future.

May 2018:  Consultation with academic deans and academic affairs to seek endorsement and support resources.

September-December 2018:  Identify/finalize the individuals responsible for each thread.