My recent experimental and theoretical studies have been focused on an analysis of the "codes" with which nerve cells in sensory systems represent information about external stimuli, the neural mechanisms through which that information is processed within subsequent stages of the nervous system, and the extent to which the nervous system may have become optimized through evolution.

The two cerci on the posterior end of a cricket. Each cercus is covered with 500-750 filiform mechanosensory hairs. 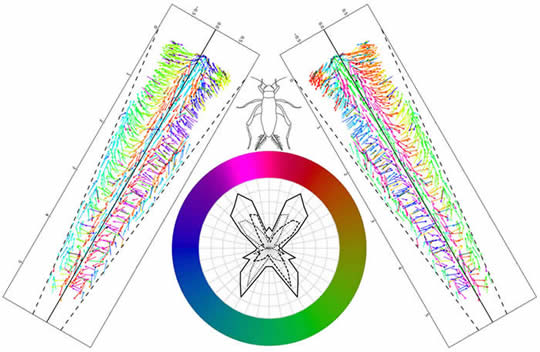 Map of the distribution of filiform hairs on the cerci, with color indicating the excitatory movement direction of the hairs.

My recent experimental and theoretical studies have been focused on an analysis of neural coding in the cricket cercal sensory system. The general problem has been broken down into several distinct questions related to aspects of the observed stimulus/response characteristics of the neurons: 1) What parameters of sensory stimuli are encoded in the spike trains of the receptors and first order sensory interneurons in this system? 2) What is the theoretical limiting accuracy with which those parameters could be decoded from the neuronal spike trains? 3) How is the information encoded within different aspects of the spike train patterns? 4) What are the structural and biophysical mechanisms through which the observed coding scheme is implemented within this neural network?

Movie of the 3-D structure of two identified sensory interneurons embedded within the clouds of synapses forming a neural map of air current direction in the terminal abdominal ganglion. 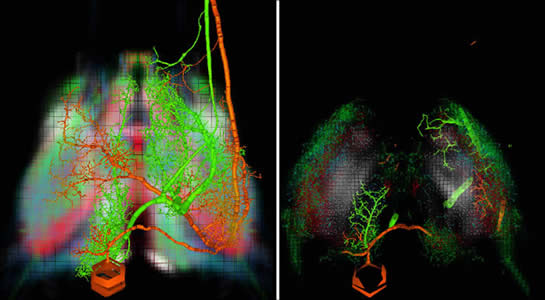 My general approach is to integrate electrophysiological experimental recording techniques with advanced mathematical analysis techniques toward a rigorous characterization of the neural encoding schemes. Electrophysiological approaches techniques include intracellular microelectrode recording and multi-unit extracellular recording. The major analytical techniques I have used include compartmental modeling of single identified nerve cells and a branch of multivariate statistics called "information theory."

In collaboration with Dr. Tomas Gedeon in the Department of Mathematical Sciences and Jeff Heys in the Dept. of Chemical and Biological Engineering, I am also studying the extent to which the structure and function of the cricket cercal sensory system may have been optimized, through evolution, to be more efficient from the standpoints of neural computation and sensitivity. The figure below is from Heys et al. (2012), and shows the distribution and movement directions of filiform mechanosensory hairs. A, B: Experimental measurements of filiform hair positions and movement directions in two different cricket preparations. C, D: Model predictions for an equivalent segment of the cercus for two different simulations using different initial hair positions.

In collaboration with Dr. Ahsan Mian and his students in the Dept. of Mechanical Engineering, I am studying the biomechanics of the socket at the base of the filiform mechanosensory hairs. Although the stimulus-response characteristics of the receptor hairs have been studied previously, the structure of the socket at the hair base has not been characterized in terms of deformation and stress transfers. The movie below is a simulation of the deflection of the hair socket generated with a finite element analysis model developed by Kanishka Joshi as part of his Masters Thesis research in Dr. Mian’s lab.

In association with the Bradshaw Foundation, I have examined the recurrent geometric motifs of ancient rock art in relation to the anatomical and neurophysiological characteristics of the human visual cortex. This neurophysiological approach tests the 'universality' hypothesis and introduces the concept of 'neuro-aesthetics'. For a summary of the work, with a brief video that summarizes the material, check out this link on the Bradshaw Foundation website:

I taught 3 classes in recent years:

BIOH 313: Neurophysiology (Fall, 3 units, 2 lectures/week, 1.5 hrs each) Physiology of integrative mechanisms in nervous systems. Topics range from the mechanisms of synaptic transmission and action potential generation to the neural basic of learning and memory.

BIOH 425: Sensory Neurophysiology (Spring, 3 units, 2 lectures/week, 1.5 hrs each) Neurophysiology of sensory cells and systems. Topics range from the mechanisms underlying sensory reception to the processing of sensory information at higher stages. The major focus will be on human sensory systems. Pathologies that effect sensory perception will be considered. This course satisfies the requirements for a CAPSTONE COURSE.

UH 400-1: Language and the Brain (4 units, 2 lectures/week, 2 hours each), co-instructor with Dr. Jerry Coffey. Neurolinguistics is the study of the relations of language and communication to aspects of brain function, i.e. it explores how the brain understands and produces language and communication. The field is intrinsically and essentially multidisciplinary: it attempts to unify theory from neurology and neurophysiology (how the brain is structured and how it functions) with linguistic theory (how language is structured and how it functions). There has been a great deal of recent interest and research in aspects of communication that extend beyond the narrow definition of language, including non-verbal communication, art and musical expression. The goal of this course is to explore all of these aspects of human communication.

I was involved with the BioScience Montana project!

BioScience Montana is an immersive health sciences project for Montana 4-H students going in to grades 8-11, and is funded by the National Institutes of Health to help Montana teens prepare for careers and studies in the health sciences and biomedical research. Approximately 36 4-H students from throughout Montana, along with adult team leaders, are chosen to participate each year. Students are introduced to hands-on science and research projects about how the brain senses the environment, how scientists deal with infectious diseases, the connections between nutrition and health. Students also learn about the manycareer opportunities and studies in health science-related fields, and use digital media and social networking technologies during the program. I am one of the co-Investigators, as well as being one of three science module leaders. To learn more about this great program, check out the website:

Here is a YouTube interview about my involvement with the program:

One of 6 founding editors, and Action Editor, Journal of Computational Neuroscience, Kluwer, 1994-2010

Department of Microbiology and Immunology